What Happens in Egypt Doesn't Stay in Egypt 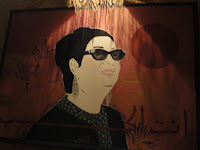 How are you? I hope this letter finds you well. I thought to send you this letter since I'm leaving you tomorrow. I want to tell you about my two weeks trip to you and Egypt as a whole, so here we go! 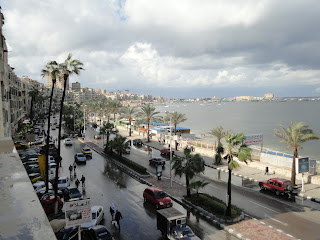 I have always wanted to visit Cairo.. I have always been eager to see the place Um Kulthom, Najib Mahfouz and most of the Arab world's intellectuals came from; and see Egypt, the country rich with history and civilization. Then, your revolution started against Mubarak's tyrant regim on the 25th of January, 2011 and that doubled my eagerness to visit you. It was really a dream that I impatiently wanted to come true. Then, I was lucky and over-joyed to have the chance to finish my diploma from the Swedish Institute in Egypt. I arrived in Alexandria on the 12th of Nov. and stayed for one week. The week later; I rushed to Cairo to go directly to Tahrir square to have a political dosage from Egypt. And, of course, to spend one more time around Cairo's venues, cosy cafes(A'ahwa) and see the Pyramids.

To be honest, I liked Cairo more than Alex ,, I don't know why! My first week in Alex was relatively calm from the political level. There was no demonstration and I spent most of the time on studying with the Swedish Institute. The walk along the coast was really soothing and wonderful; thanks to the sea's nice breeze and the lovely accompany I had with the other participants in the course. During the walks, it was very easy to hear what the people were talking about. Definitely, politics was the hot topic. It was like there was preparation for something but I couldn't figure it out. It was not clear that the revolution was about to have the second round. 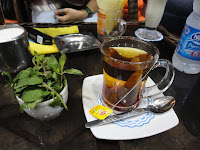 "The raining at that moment" Alexandria has wonderful cafes (A'ahwa) flavored with classical songs of Abdel-Halim, Um Kultholm and Mohamed Abdel-Wahab. One coup of tea with mint at one of those cafes could easily make anyone forget all his problems and relax. I loved the cafes and its tea... THE tea with mint ;)

Then, I moved to Cairo; the crazy beautiful Cairo. My first day was on Friday 18th of Nov. Once I arrived, I headed along with friends to Tahrir Square. It was pretty calm and vibrant. The chants were magnificent. That represented the political liberty that the nation is thirsty for. I walked out of Tahrir to walk over the bridge where the great attack took place against protesters by the security forces during the first days of the revolution earlier this year. That gave me goose bumps. 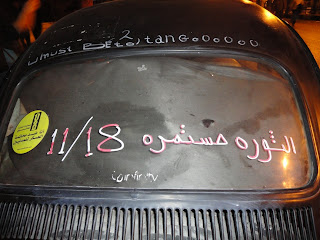 Next day, the violence began as protesters were protesting next to the Interior Ministry. A number of protesters were killed and hundreds were wounded by security forces. After being warned hundreds times by the Swedish Institute, friends in Cairo and family in Yemen not to go to Tahrir, I had second thoughts of going. My friends and I waited one day and went next day to see what's the situation for real.

Well, the critical situation was at Mahamed Mahmoud St. where the clashes took place, so we avoided going to there. The square is so big that have more than four streets siding from it. It was pretty safe everywhere except Mahamed Mahmoud St. but the tear gas around the whole Tahrir was really harmful to anyone who was there. Personally, I got physically ill. My throat and chest were hurting me a lot and my voice vanished and one of my friends had her eyes hurting; tearing because of the tear gas. It was really awful and I can't imagine what the protesters at Mahamed Mahmoud St. went through.

Interestingly enough, people outside Tahrir have a normal life; like nothing is happening. That was a bit confusing but I have seen such situation in Yemen too. Life goes on anywhere, no matter.

Couple days later, I went with few friends to donate blood at Qaser al-Eini hospital for protesters. Two of my friends managed to donate, one Swedish friend fainted while donating and I was rejected to donate because of my small weight. I was very sad for myself and my friend who fainted. Thank God he was alright afterwards.

Overall, the welcoming looks and words I got from Egyptians when I told them that I was from Yemen, were priceless. The discussion and talks about politics were deliciously never ending. The whole trip energized me totally and I cherish every moments. No doubt, this was my first trip and will NOT be my last. I loved Egypt and I can't wait till it gets the freedom it aspires for. I want to come back next time to celebrate that. 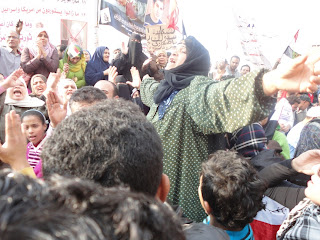