An article published in Quilliam Foundation's website gives a brief idea of "terrorist linkages" between al-Shabaab and al-Qaida across Yemen and Somalia.

The truth of matter is; I wonder from where exactly the author built his arguments! How credible were the article's sources! It's merely full of assumptions. "Al-Shabaab, right now, are busy with the drought and how to deal with what their fake promises and how to kill all pro gvt," tweeted @Leilalya as a response on this article. @Leilalya added, "honestly I don't care abt al Shabaab I wish they will be defeated though I hate violence but I'm also opposed to fake analyses. abt a so called collaboration between Aqap and Al Shabaab, 'cause this argument is ideologically motivated. I think that's a pretexte ( the so called collaboration) to justify a more harmful counter terror. strategy 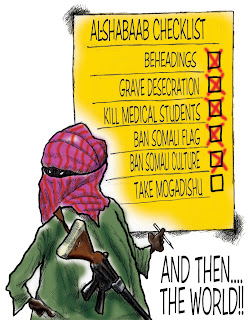 Even though al-Shabaab remains locked in conflict with the Somali government, its international allies and with rival Somali tribes, since the start of the Arab Spring al-Shabaab has stepped up its work with Arab-focused jihadist groups. For instance, it has sought to build links with al-Qaeda in the Islamic Maghreb (AQIM) and with nascent jihadist groups in Libya. Most striking, however, has been its increasing co-operating with militants in Yemen, a possible example of how it will seek to work with other jihadist groups in the future.

Despite struggling against a number of internal challenges within Somalia, in recent weeks alShabaab has begun sending several hundred fighters to Yemen, including both al-Shabaab members as well as foreign and Somali fighters who regard themselves as being either allies or part of alQaeda. The supply of fighters to Yemen seems likely to be the result of al-Qaeda in Yemen (which now operates under the name of ‘Ansar al-Sharia’) requesting experienced reinforcements to help it control the areas in the south of Yemen that it has seized, particularly in the Aden, Abyan and Lahij governorates. An additional reason for moving fighters from Somalia to Yemen might be because western airstrikes in Somalia now pose a considerable threat to these operatives if they stay in Somalia.

Most of the fighters have been sent to Yemen from the relatively calm Kismayo area of
Somalia, where many foreign fighters are based. In addition to sending fighters, al-Shabaab has also sent to Yemen a number of its seasoned political operatives, both Somali and Arab. Al-Qaeda in Yemen/Ansar al-Sharia, seemingly intends to use these to run, police, administer and collect tax in areas that it has seized control of, such as the Yemeni town of Ja’ar, which al-Qaeda recently took control of and where they lashed a man for drinking alcohol. Notably, Abu al-Zubair, a Yemeni Sheikh who is the religious leader of al-Qaeda in Yemen (real name: Adel al-Abbab) recently told a jihadist web-forum that "what is keeping us from coming out in the open more completely is that we lack many administrative personnel and the money with which to offer services to the people".


It seems likely that the influx of al-Shabaab personnel into Yemen is intended to bridge this skills gap. Significantly Abu al-Zubair has also explicitly compared al-Qaeda’s takeover of parts of southern Yemen to al-Shabaab’s actions in Somalia. This seems to suggest that al-Qaeda in southern Yemen may aim to work with local tribes, clerics and businessmen in order to consolidate its powerbase there in the same way that alShabaab has done in Somalia. Significantly, Abu al-Zubair also said that his group was in contact with al-Shabaab directly.


In addition to these operational links between al-Shabaab and local Yemeni leaders there is also emerging evidence that al-Shabaab are reaching out to Anwar al-Awlaki, the al-Qaeda-linked USborn preacher who is currently at large in southern Yemen and who is held in high regard by alShabaab as well as a wide range of other Somali and Yemeni radicals. Such links are likely to be partly made through the jihadists currently being sent from Somalia to Yemen. For instance, Ahmed Abdulkadir Warsame, a Somali who is currently facing terrorism charges in New York after being arrested while travelling between Yemen and Somalia, is accused of arranging weapons deals between the two groups and also of acting as a ‘go-between’ between Anwar al-Awlaki and alShabaab.


A further potential link between al-Shabaab and Awlaki is Qasim al-Raymi, one of the
most senior leaders of AQAP in Yemen, who is believed to have spent time in Somalia with future alShabaab leaders after he escaped from prison in Yemen in 2006. These individuals and others may increasingly serve as key links between al-Shabaab, al-Qaeda and Anwar al-Awlaki.