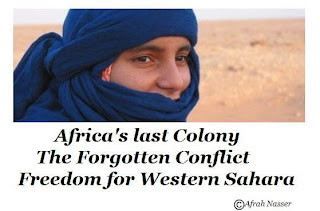 Being an activist means shedding lights on key global issues; in the hope to bring change for a better tomorrow for coming generations. In the midst of the Arab Spring; there is little attention paid to a revolution against a colony that has been happening for couple years and no one seems to care enough about that. As an activist; I couldn't help it but blog about this now.

Western Sahara cause, the forgotten conflict has been struggling for many decades for its independence. Western Sahara is a nation with undoubted claims to independence, yet still exists under the yoke of neighboring nations. Western Sahara is a territory of North Africa, bordered by Morocco to the north, Algeria in the northeast, Mauritania to the east and south, and has been on the UN List of Non-Self-Governing-Territories since the 1960s when it was a Spanish colony.

I was blessed to meet up in Stockholm with Senia Bachir Abderahman, 21 years old, from Western Sahara and BA holder in Biology Study. With her passionate voice, I saw how she was a great advocate on her nation’s struggle. We meet for couple hours and talked about Western Sahara (the interview is on audio below and my apologies for the law quality of the sound). I was saddened by the little media coverage given to this nation. “We have been protesting in Western Sahara since last November and we had little media coverage comparing to the Arab Spring,” she told me. Her claims were confirmed by Pro. Noam Chomsky, the American philosopher and activist. (Watch the video below)

I dream of a world where we have an absolute democracy but I find hard time to think that my dream would come true one day. I hope I’d still be alive to see my dream comes true.


Interview with Senia from Western Sahara