"The international community must not be silent on what it happening in Yemen," Amal Basha says 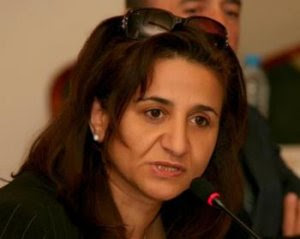 In what ways are women participating in the protests in Yemen?
The leading force behind this movement are the students from Sana’a University. They are gathered in Al-Huriya Square (Freedom Square) in front of the University. Women and women’s organisations are participating in the demonstrations and supporting the demonstrators, they stay until late at night in Freedom Square.

In general, the students are protecting the women who are demonstrating on the square. Women are not generally targeted by the security forces in the repression of the protests because there would be an outcry. One woman demonstrator was arrested and imprisoned a couple of weeks ago, but she was released after one night, because we protested.

On Tuesday 22 February at 11pm, the security forces violently attacked demonstrators in the square with live bullets. Two were killed, and 25 people were injured. Security forces in civilian dress tried to arrest a woman journalist but were prevented from doing so by students who heard her screams for help.

How is your organisation participating?

Today, we had a coordinating meeting with more than 20 NGOs in Yemen, in Sana’a, trying to support and provide assistance to the peaceful demonstrators. We have established committees (health, information, media, protection), who are present in the square. The youth have already organised themselves but they need a lot of support, they need food, tents, blankets and first aid. The students have been using the nearby Mosque to meet their needs in terms of water, but the government has now cut the water from the Mosque. They are preventing first aid from entering the square, and they are preventing other supporters from accessing the square.

Are there demands specifically relating to women and their rights?

What is positive in this movement is that the call for a regime change has united the people in the North and in the South. And now, all the people in Yemen are calling for change. The message and the demands of the South to separate have stopped and they are joining forces for one demand: Change - changing the regime, changing the system.

They want a modern country, respect for the rule of law, a constitution that respects the community and the will of the people, that ensures the balance of power between the different forces. These are the demands of the people, they want equality, an end to corruption, the end to an oppressive regime, and the detention of hundreds and thousands of people, to use war as a means to solving problems.

There are no demands specifically about women, but a true democracy would necessarily mean equal rights and equal participation for men and women. The youth that are demonstrating believe in equality, I think.

What are the current obstacles to women’s participation in public and political life in Yemen?

Women in this country are not allowed to take part in the decision making, they are not recognized as equal human beings, and are not in the places they deserve to be in, despite their qualifications and education. This is a very discriminatory country, it discriminates between men, against women, between people from the North and South... Discrimination is a big problem we are facing in this country.

What is your perspective on the ongoing events in the rest of the region?

The anger started in Tunisia and has spread to Egypt, to Libya, to Yemen, to Algeria, to Sudan, to Bahrain, to Syria... I think these protests can be seen as positive, I think changes are happening.