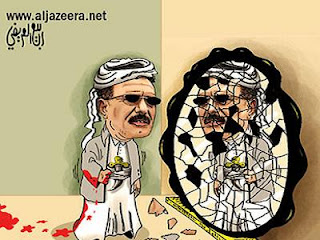 I’m a little bit nervous about writing this post because it could be one of my most important articles or it could be pointless in a couple days or weeks. Saleh left Yemen to Saudi Arabia yesterday. He went for medical treatment after he was injured last Friday, 3rd of June when his palace was attacked by rockets – by al-Ahmar family or someone else!

His departure was followed by celebration by Yemenis inside the country and abroad. People are happy that Saleh seemed to be defeated. Frankly, Yemenis needed to see Saleh defeated; they needed to have a little bit of joy after all the bloodshed and killing from Saleh’s forces for the past five months. It’s time to take a moment and breathe for Yemenis. 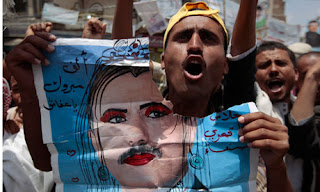 However, it’s unclear if Saleh won’t return to Yemen after the medical treatment ends and it’s even more unclear if Saleh’s relatives and supporters would leave things peacefully in the coming days. Saleh has a number of sons and relatives who are taking charge of very important positions in army and other positions. What will be their reaction? What will they do to Yemenis after Saleh departed? What is next for Yemenis? .. ?? etc.


For the meantime, I call this a cautious celebration. I rejoice this moment but I’m still worried about the future.