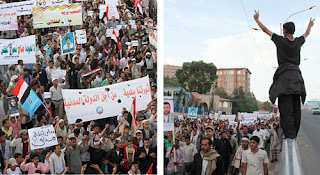 Abdulsalam Al-Maili, Major Colonel of the 1st Armored Division told the Yemen Times that those protesters were “armed thugs” who wanted to disturb the peace.

“We caught them, armed with guns, Kalashnikovs, bombs and bazookas. These thugs are paid by suspicious groups that are known by everybody, by those who are anti-revolution” said Al-Maili.

The protesters who were attacked on the 60 Meter Road told the Yemen Times that Asker Zua’al, the spokesman for Major General Ali Mohsen, was the one who ordered the attack and warned the protesters to leave the area.

The peaceful youth protesters marched on Tuesday to the vice president’s home. They also stayed the night in front of Hadi’s house on 60 Meter Road. The marching youth gave Hadi 24 hours to form a Transitional Council to take power over the country until the next election.

The 1st Armored Division, who are protecting Hadi’s house, said that it’s their duty to protect Hadi’s house whether he has accepted to be the acting president or not.

Some of the protesters accused the division of trying to protect Saleh’s regime and fooling the revolution.

“We agreed with the division that we will stay 24 hours from 5:00 yesterday until 5:00 today but the division attacked us today with live ammunition at 12:00” said Ali Hameed, one of the protesters camping in front of Hadi’s home.

“The attackers were the division, not the central security forces, Asker Suhail was in their first line of the attackers, and they took four of our friends. Today they showed on which side they were the whole time.” He added.

The banners they held were different than usual, most of it was showing the rejection of the possibility that Saleh comes back to the country after treatment. “Never return” one of the banners read. “The revolution is waiting, God bless those who determine it” another banner read, it showed that the protesters yet don’t feel that the revolution met it aims, some are calling Saleh departure a “golden opportunity” that should not be wasted and the escalation should start.

The Joint Meeting Parties [the opposition parties’ coalition] declared their approval that vice president Hadi should be the acting president in the transitional period.

A member from Islah party, the biggest opposing party, that the JMP is implementing the Gulf Cooperation Council initiative as away to protect Yemen from a high possibility of a civil war.

From their side, the independent protesters warn that the revolution should escalate to withdraw the whole regime and to prevent Ahmed Ali, the head of the Republican guards and Special Forces from using his forces against the revolution.

The fear of the counter-revolution among the protesters is big, as too many players’ aims to get benefit of the situation.

Mohammed Saeed Al-Shara’bi, journalist and activist said that the revolution is in a dangerous stage now and that the independent youth should get rid of the political parties’ control. ”The independent protesters went by their own to this march, it’s their decision, they challenged the JMP especially Islah party who is trying to play Talban” said al-Shara’bi.

“The Independent Youth are ready for a second revolution, they get Saleh out of the country and they will get anyone ales and any political part that will try to steal the revolution” he added.

The youth from the JMP rejected the JMP decision in supporting Hadi and join their voice with the independent youth that this is a onetime chance that should be taken the best way.

“Although the march wasn’t as huge as usual , this is the best march I have participated in, a feeling of freedom all the time, the youth themselves are taking the lead and demanding what they believe the right thing” said Mohammed Al-Emad, a member of Islah party who participated in the March to saleh’s house.

By Shatha al-Harazi for YemenTimes newspaper