An Appeal on Reconsidering Execution of a Yemeni Lady in Iraq

We urge you on behalf of humanity to help us to stop the excution of the 29 years old Yemeni woman ( Hasna Ali Yehia ) who is imprisoned in iraqi prsions and her only charge that she was married to the Qaida man ( Abu Ayyub al-Masri ) who was killed on 2010 _ and she didnt know that he belongs to qaida when she got married to him.

A number of Yemeni human rights organizations call human rights activists in Yemen to protest outside the Iraqi embassy in Sana'a tomorrow morning to demand Iraqi government to release a Yemeni women that arrested last May with her 3 children Mohammed 5 years old ,Mariam 3 and Fatima 1 year and half.
Hasna was arrested on charges of terrorism because she was the wife of Abu Ayob Al-Almassri one of the Al-Qaeda leaders who killed by Iraqi forces last April.She had been married in the late nineties a man who holds an Egyptian passport who was working in teaching in Yemen. Hasna belong to Amran province north of Yemen.

Here is another piece written about her:- 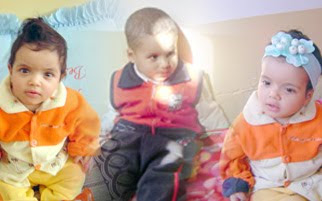 Hasna Ali Yehye Hussain, from Amran province north of the capital Sana’a, is mother of three, her children living with her in prison, because their father is al-Masri.

Hasna is appealing her sentence from her prison cell in Baghdad and asking for help from anyone who is willing and able. Her primary concern is getting her children out of prison.

The chairman of the National Organization for Defending Rights and Freedoms (HOOD) Mohamed Naji Alaw, states how hypocritical it is for the US to call for international human rights and Iraqi freedom an innocent women and her children are being held in Baghdad without any formal charges or legal representation.

“The charge against Hasna is that she hid her husband from Iraqi and American authorities. However, she was unaware of her husband’s terrorist activities when she aided in hiding him. She is being punished simply because of her marriage to al-Masri,” Alaw said.

Alaw described the American and Iraqi hadling of Hasna and her children as reprehensible behaviors.

He stressed continued communications with the Iraqi government and human rights organizations in Iraq through channels until Hasna and her children are freed.

He appealed to Iraqi government and human rights organizations to stand Hasna and to see that her freedom is returned to her.

Lawyer and human rights activist Abdul-Rahman has taken up the charge of defending Hasna’s in the National Organization for Defending Rights and Freedoms. Barman said that he has been communicating with the victim›s family in Yemen, pointing out that the latest information he had was that she had been tortured at the end of the month of Ramadan. “Her Children are still wearing the same clothes they had on when they were brought to prison which have deteriorated into rags. They are living difficult satiations,” he said.

Many human rights activists in Yemen expressed deep concern about the possibility of the execution of al-Masri’s widow.

Last week a public campaign was launched in all the mosques in the Sana’a to defend Hasna. Thousands of leaflets have been distributed that offer the story of her arrest and demand the popular movement to put pressure on Yemeni government and U.S. troops in Iraq and the Iraqi authorities to release her.

Three months after her arrest she met the Guardian in a secure building in the heart of Baghdad. Her husband›s death had since been trumpeted by the US vice-president, Joe Biden, as a crippling blow to al-Qaida.

Hasna seemed lost – but circumspect. «You are the first man I have willingly spoken to apart from my husband or father for the past seven years,» she said, her uncovered face revealing Coke-bottle spectacles and pimply cheeks.

The petite Yemeni had spent five years being shuttled from one safe house to another between summons from her husband, with whom she had had three children. She had raised them alone. They now share her prison cell in the Iraqi capital. But they will soon be taken and made wards of a state that they don›t belong to. Hasna’s fate seems even more uncertain.
«I made no choices in my marriage,» she said, tears welling – offering a rare insight into life as a terrorist leader›s spouse. «I brought up my children in Tarmiyeh and Mosul [both hotbeds of the Sunni insurgency]. Even when I was with him in the house I was on the first floor and he was living in the cellar. I was not allowed to talk on the telephone or to listen to music or watch TV. There was one TV in the house, but it was in a private room used only by my husband and his group.»

Hasna was completely unaware of her husband’s al-Qaeda association. From early 2004, however, she had a sense that he was involved in fighting the Americans. «We were in Fallujah then and when the fighting started for the first time that year, I started to have doubts about my husband. After that I thought he was probably involved in killing Americans,» she added, suggesting she supported the notion of violent jihad against an occupying army.

«But when they told me [during interrogations last month] that he had been involved in killing innocent people, my son was screaming, saying: ‹Mama, mama, listen to what they are saying about him, it›s impossible.›»

She added: «I will lose my children soon – and for what? What have I done, and what have they done to live their life without a mother? All I want is to take them back to my father in Yemen and forget about Iraq. Yes, I have regrets. Of course I do.»

Hasna is from the city of Amran. In 1998 she married a man named Youssef Haddad Labiban Egyptian who came to Yemen with a false passport to become a teacher then left to the UAE, and then moved to Jordan, then to Iraq under the excuse of work.

Hasna with her three children, Mohammed (5 years) and Mary (3 years and a half) and Fatima (a year and four months) Travel led to Iraq in 2002.