Yemen is waking up! 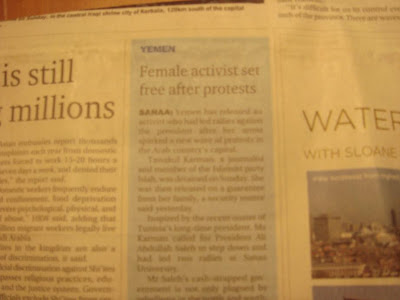 I woke up today in the morning and went to attend a forum –in Bangkok, Thailand; where I’m staying right now- and a friend handed me the Bangkok Post newspaper to read brief news from Yemen. “Female activist set free after protests”, that was the title. The news goes on, “SANAA: Yemen has released an activist who had led rallies against the president after her arrest sparked a new wave of protests in the Arab country’s capital.”


What popped right away in my mind was the following;-

Protests, demonstrations and all events that say/send a message to governments is a sign of one thing that is the nation is not satisfied with its government and it needs a new government, new administration and a better handle. In simple words, when a nation protests it means they are just fed up! What Karman did is just a pure sense of nationalism and it was her absolute right! Apparently Karman like any other nationalist Yemeni protested to send a message that Yemen is not satisfied with its government anymore and it needs an immediate change!

I see a great link between what nationalism means and protesting. Yemenis can’t let themselves die silently; they should at least have the right to shout out loud before they die out of despair, poverty, unemployment, frustration and suppression. Yemenis are fed up with not even being able to have a mere chance to have a descent life.

Regardless of gender issues, what Karman did was what every Yemeni should do. She has been an activist for a quite some time and this is not any surprise that she did that. However, all Yemenis must have the same -if not more- concern over their country’s issues.