Yemen, like many developing countries, suffers from a huge rate of poverty. Recently, news on the high food prices around the developing countries garbed the headlines, reporting on poor people suffering from hunger and undernourishment. Typically, Yemen shares the same hardship.

As an activist/journalist/writer and an utter “Facebook-Freak”, I used all my abilities/skills to tackle that issue, at least in a small scale with a simple idea.

I thought how a nation could ever achieve development while its people are starving! How could Yemen fight illiteracy and poor health while its people are starving? Logically, if you support a kid to go to school, he must be well-fed in the first place before he goes to his school and if you provide a person in need of medication, he must have proper food with his medication. That’s so simple. Food must be the number one priority.

Hence, I had a very simple idea which turned out to be successfully received. Yesterday, it was my 20ish birthday and I planned to celebrate it exceptionally. I thought to invite all my friends to a place and ask them to bring food cans -as my gift- which later on would be distributed to couple families who are in need of basic stuff like; food. I was completely afraid when I first thought of this, that no one would care at all!

Nonetheless, I took the action and did a Facebook invitation, inviting my friends to come to the yard of the French Cultural Center. I asked them all to bring food can(s) with them so we all could donate them to the poor families afterwards. I was surprised by the great feedback I received on Facebook. Around 50 people attended facebookaly. 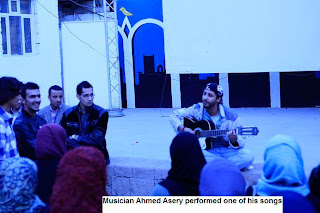 Next, on my birthday, that’s yesterday, all of them show up at the Center. One friend after the other showed up with boxes of food cans. A great deal of cans poured like I didn’t expect! It was amazing!

During the gathering, music and break-dancing were performed by dear friends of mine, entertaining all the attendance. I must here thank Ahmed Asery, Ahmed al-Shaiba, Zaid Salah, Ryan Sanabani and Blast-boys break-dance group, especially Kimo who spiced up the gathering with their performances. 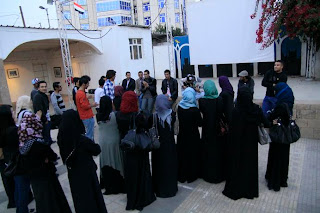 I also must thank the French Cultural Center for welcoming the initiative and embracing my guests in their yard.

Also, I did a brief speech, expressing my gratitude for my friends’ support to my idea and for their donations. I told them, “All of you have a beautiful and good spirit inside your hearts and this is what Islam’s real meaning is really about! Thank you so much my friends.” 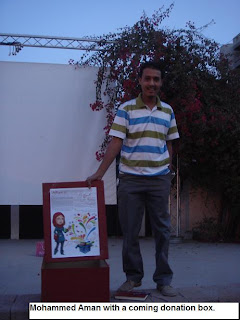 Then, couple friends suggested that we start an initiative, inspired by this day and create a Facebook page with the same theme of charity and get connected with all interested Yemeni people. That’s a work in progress and will be done soon!

At the end, the number of cans was so remarkable. The cans got divided into more than two and will go to more than couple families. The main outcome of this idea is that communities should be shoulder to shoulder and help/care about each other. In addition, the idea is about how anyone who really cares about his community could truly make a difference with easy and simple ideas. 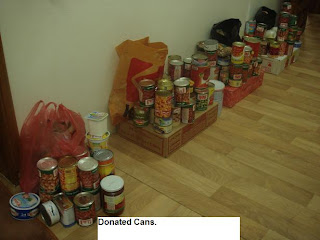 For me, it was about thinking outside the box. When I first had the idea, I was thinking that I wouldn’t wait for a president, a minister or an NGO to do this. Additionally, I really hope that all my friends and Yemeni thinkers would start doing similar stuff and think outside the box. I hope everyone take advantage of all his abilities and skills for achieving a noble cause.