Yemen will discuss its MDG report at the end of this year, Alsoswa 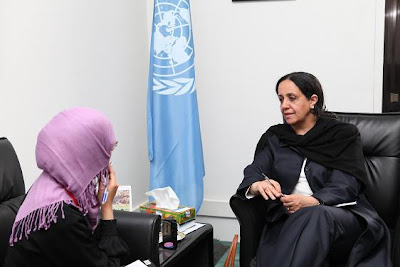 The many recently launched projects that genuinely aim at empowering economic and gender sectors in several parts of Yemen lure nothing but prosperity. However, the progress of these projects face a number of challenges, one of which is corruption, regarded as the biggest obstacle to progress in Yemen. For an insightful look at the sources of and solutions to Yemen’s challenges, Ms.Amat al-Alim Alsoswa, Assistant Secretary-General of the United Nations, Assistant Administrator of United Nations Development Programme and Director of its Regional Bureau for Arab States, talked to the Yemen Observer during her last visit to Yemen from the United States.

Yemen Observer (YO): What’s your impression on your visit?

Amat al-Alim Alsoswa (AA): First of all, I would like to say that I’m very happy to be back in Yemen after all this time. This was the longest time I’ve been away from Yemen, about a year and 3 months. The reason for my absence has been my engagement in many countries that we work in. We work in Yemen as well, and that’s the specific reason that led us to conduct all these intensive projects here, including many governorates, programs, meetings, and groups.

YO: What’s on your agenda during this visit?
AA: Essentially, my visit is a regular examining visit for United Nations programs, especially the United Nations Development Programmes (UNDP). It was also to take a look at the humanitarian plight in the displaced peoples camps and check on the people who were affected in Sa’adah. In addition to that, it was a chance to follow up with what has been conducted after the signing of the agreement regarding the rebuilding of Hadhramout after it suffered from the heavy floods in 2008. I was there in Hadramout right after the disaster occurred and, at that time, we established a project to rebuild Hadramout. Therefore, I wanted to review the results.


YO: How does the UNDP contribute to individuals’ and communities’ welfare?
AA: The UNDP has big and fundamental partnerships in several sectors that aim to enhance local authority and local administration. It’s a very important project because it’s related to establishing local constitutional capacities in many areas through out the country. Those capacities will speed up decentralized administration process at the local level. In our opinion, that’s a necessary and appropriate solution for all Yemen’s issues, whether for its developmental issues or otherwise.

Particularly, in Hadramout, women are whether the most beneficiaries or most sufferers if there is any project but most of the time they are the ones who suffer the most because of social strains or the many roles they have to play. The majority of women faced social and economical problems after the floods’ damages. We realize that enhancing the economical and social capacities for those women and the youth, girls and boys between the age of 18-25, is one of the key answers.


YO: Why do you think women should be the main aim?
AA: Women in need, in particular, are our project’s target because those women are the ones who contribute to the household, who are without providers and who don’t have chances to obtain jobs in official public service. In short, women and youth, who are the future of the nation, who are most affected, are our target. That’s the most important point of the projects’ agreements and the meetings I conducted. We also have many branches of other programs.


YO: Are UN programs revised and how do these programs achieve its objectives?
AA: The resident representative of our programs in Sana’a, Ms. Pratibha Mehta and all the other UN offices, the specialized resident or the unresident ones have already done a revising process to UN’s programs for the coming years. We have evaluating consultancies but this time it was a middy revising so that the UN can intensify its programs in certain fields because Yemen, like other countries, is asked to present a report about its achievements regarding the Millennium Development Goals (MDG), that will be discussed on a very high political echelon in New York at the end of this year, on September, 2010.

As I know Yemen’s report’s project is ready and understandably it’s still a work in progress because we are talking here about 8 goals that each is much greater and more difficult than the rest. Therefore, we realized the circumstances Yemen face in parallel with the international economical deterioration situation that impacted Yemen greatly, even though Yemen was not a direct participant or directly involved in the crisis’s source but it received relapses because of that. For instance, the Yemeni labors abroad who used to import money to Yemen, many of them have returned to Yemen. Plus, other problems Yemen face lately. All this unfortunately led to great steps back.


YO: What’s the result you hope to achieve after all these projects’ launchings?
AA: Our programs’ goals rang from long-term goals to short-term ones. Like, for instance, the projects for rebuilding and constructing. Those will take some time. However, in my opinion, the main and most fundamental issue in Yemen, its biggest and longest standing obstacle to development, is poverty and its consequences. Especially, when we look at the high unemployment rate, which mainly involves Yemen’s youth, we see that it’s a huge dilemma that most of the time is framed as a political issue. Because there are many holes caused by feelings of frustration and desperation, we often see people unfairly exploit such feelings and energy, which should instead be invested and used for the nation’s welfare.

Labor issues among youth are very crucial. They must be prepared for the labor market because they are the ones who give hope to their families’ lives. As you know, in Yemen, an individual is often a provider to his big family and sometimes to his distance relatives as well. In light of this problem, we realized that poverty hits a huge number of families and that requires that action be taken. Therefore, we did revise all the efforts and the programs that the UNDP are involved in so that we can focus on fundamental issues and endeavors to establish an economical settlement that helps solve some of these overall issues.


YO: Is solving the issue of poverty in Yemen the quickest and most effective method of solving the rest of the issues?
AA: I think that it helps because poverty is a wide term. It doesn’t only mean needing food. It also means lacking access to descent medical and health services, the lack of an ideal weight, and the lack of the capacity to participate in activities. All of these matters are linked. It’s not merely about not securing one or two meals. It also means not having medical treatment for the dangerous diseases that exhaust what’s left for most Yemeni families’ bugets and limited incomes. Having said that, poverty is not only an economical term. It also means lack of empowerment, that’s to say the ability to participate in public life, and a lack of ability to establish, because all that relates to lacking abilities work within communities. So, solving poverty in its wide sense is the key, not just solving it in the narrow sense.


Undoubtedly, the whole world suffered several crises. The food crisis preceded the financial crisis, which happened internationally and probably led to the finical crisis in the end. Yemen also has a huge number of citizens who unfortunately have very low incomes that don’t allow them to have easy access to descent nutritional food that protects them from getting infected by common diseases. And thus the vicious cycle continues. On the other hand, political empowerment is also crucial. When an individual’s economical needs are fulfilled, he will have the ability and the peace of mind to be part of greater things. That’s what we call humanitarian development, which causes results that lead to another successes.


YO: Do you agree that corruption is Yemen’s biggest challenges in terms of fighting all the obstacles to its development?
AA: It’s not the only obstacle to development. It’s one of many obstacles. Corruption works as a waste of capacities, money, dignities, basic services and so on. At the same time, we should ask how to fight corruption. People themselves have certain responsibilities to reward and punish. Giving people decent incomes prevents them from taking part in this kind of corruption. Putting the right person in the right place is an answer as well. Why do we want to build societies? We build societies to invest our current capacities and energies that would have been on the right path if they didn’t have to face economical corruption. Corruption is an international problem and for Yemen it is a challenge that takes many forms, not only an economical one. Poetic, social and moral corruption is a disaster. Corruption slows down any hoped-for positive results.

Nevertheless, the UNDP system has many ways to execute its work. We have projects that are directly linked to governmental plans, but the majority of our projects aim at community empowerment that is directly linked to citizens and beneficiaries themselves. This trend is very obvious in our latest couple of projects. People in the project’s area were who directly benefited from the projects. It was a team-work. Even when we conduct the projects’ drafts, they are involved so that we can serve them more closely. Any project we conduct has strict policies so that the projects can be well invested.