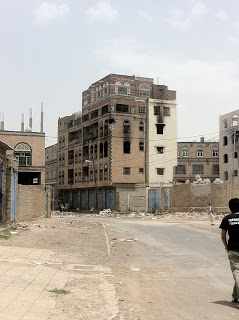 Hundreds of citizens in al-Hasbah are still living under siege and this siege is goes worse after sunset where leaving one's house is still risky due to the spread of armed tribal people in the roads of al-Hasbah.

The citizens whose houses were affected because of the heavy artillery call up on all ministry of Defense and Ministry f Interior to save them from the unexploded and defused shells many of which are still stuck on the roofs of many buildings which they consider as timing bombs.

Citizens also suffer from lack in food materials, electricity blackouts and fuel. Talking to a number of citizens mostly girls and women, they said that they do not feel safe anymore because of the excessive presence of armed people. This is in addition to that many alleys and also main roads are blocked by armed people.

Citizens also demanded explanation and directions from the authorities about the sides they should talk to ask for compensations for the damages they had. Many houses have damages, lost people in death or members in their families were injured during the clashes that happened between the government troops and al-Ahmar armed groups that started on May 23 until June 4, 2011.

Many citizens have complained several times to the local authorities in al-Hasabah regarding the piles of garbage that is stacked in several places in the area. They complain about the hostility of the arm men that made it difficult for all citizens to move around and get what they need for their houses. Transportation, according to Mohammed al-Kohali who lived in al-Hasabah has gone very high in prices, and one cannot find a taxi or a public bus after sunset. He said that many of his neighbors told him that they cannot go to their work and if they go, they lose a lot of money and some spend more than half of their salary in transportation.