It feels like living back in the medieval ages deprived of any services, says a citizen from Al-Houdeidah 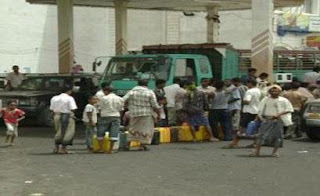 A crisis in bread, ice, drinking water is sweeping the city of al-Houdeidah. Seven people died suffering from kidney failure and many corpses were rotten due to the electricity blackouts in al-Houdeidah in the Al-Twrah and Al-Olfi hospitals morgues.

Human rights activist, Tariq Mohammed said that electricity blackouts have become a nightmare in everyone's life which almost paralyzed their daily life. Electricity blackouts also caused many material and human losses, besides, the environmental problem that came as a result of the hundreds of generators in main streets of the many shops with their exhaust caused pollution in the air.

Thousands of people also went in demonstrations demanding the resignation of the governor that could not respond to the citizens needs and demonstrators were also attacked by security units and many people were injured and two deaths were reported last Thursday. Ali al-Tihami said that he feels that they are living back in the medieval ages deprived of any services and that cars have stopped and that they might be forced to use donkeys and camels for transportation due to the lack of fuels.