Thousands of anti-government protesters in Yemen have been calling on President Ali Abdullah Saleh to step down - and they have not given up despite arrests, beatings and fatal shootings. 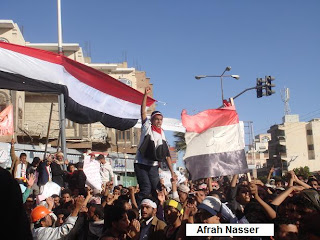 On a side street, under the shade of a row of tall spreading trees, a small group of men, women and children stand and watch as a soldier runs his hands through the dishes of pasta, rice and fish that the visitors have brought.He is searching for anything that should not be there.

It is Tuesday morning - visiting hour at Yemen's Political Security Prison in the capital, Sanaa. The air is still - the chants of the protesters across the city in Change Square cannot be heard from here. There is nothing for Alia to do but wait. Her two young daughters scuff their shoes in the dust blown in from the desert, and hold on to their mother's abaya, the long black robe that most women here wear. 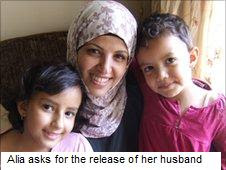 The smell of fish and spaghetti bolognese starts to drift down the street. Alia is here to visit Waleed, her husband, who was taken by security forces a year and a half ago.

That afternoon, while Waleed was at work, there was a power cut. The banging on the front door, when it came, reverberated through the darkened hallway. Outside in the street, soldiers had surrounded the block. Waleed's belongings were taken. Waleed never came home.

For three months, Alia did not know where he was - the authorities claimed to have no knowledge of his whereabouts - there was no trace of him. That was when Alia started her campaign. She made placards with Waleed's photo surrounded by quotations from Yemen's constitution. Along with her mother-in-law, she began weekly silent protests outside the offices of the security forces. 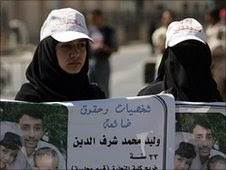 She went on marches, met other campaigners, and, after three months, she finally got the authorities to admit that they were holding Waleed. The first time she saw him in the political prison was difficult. It was hard to talk to her husband when they were separated by two wire fences with a wide gap in between.

Since then, they have become used to this form of prison visiting and call across to each other, ignoring the guards who stand beside them listening to their conversation.

Waleed is accused of collaborating with Iran and supporting a Shia Muslim movement that is fighting an on-off war against the government in the north of Yemen. The charge is based on the fact that he had bought books from Iran to set up a Shia bookstore in the capital, and on confessions that Waleed made - confessions that Alia claims were obtained by torture. As Waleed awaits trial, Alia is becoming increasingly active.

Once so shy that, according to her family, you could barely hear her when she spoke. She now addresses rallies and gives press interviews. The placards lie in the boot of her car, ready for the next protest. Nothing seems to intimidate her.

Last year she was invited to attend a human rights conference in Beirut, but was prevented from boarding the plane. Instead she was ushered into a back office and had her passport cancelled.

Being beaten by the security forces during one of the weekly protests only encouraged her further, and she says, smiling at me, her face now healed, that she will continue her work as a human rights activist even after Waleed is released.Her husband's imprisonment has changed Alia's life in many ways. "I've never been stronger," she remarks.

This unyielding, dedicated resistance is probably not what President Ali Abdullah Saleh had intended to inspire. Yet, it is being replicated in the streets and squares all over Yemen, as protesters demand an end to his 32 years of rule.

As Waleed's sister, Mawadha, puts it: "All my life I knew that President Saleh was bad, but I knew not to say anything, but now, after Waleed's arrest, we've started being more open and saying what we think. "It has made us speak without fearing."

Over the last few weeks, Yemenis from all walks of life have started to speak without fearing, and most are telling President Saleh to go. And however he tries to quell these protests - with tear gas, with paid thugs brandishing sticks and knives, and with snipers firing from rooftops, he only succeeds in increasing the number of protesters. Oppression, he is discovering, can be counter-productive.

Outside the prison, the shadows cast by the trees shrink as the sun moves overhead. The midday call to prayer begins echoing across the city, one call melding into another until they become one rolling wave of sound. The soldier eventually finishes inspecting the dishes of food brought by Alia and her daughters. It has been a long wait, but finally they are allowed into the prison to visit Waleed.

But how long will the people of Yemen have to wait to see if President Saleh heeds their calls for change?