A Bright Future Waiting for Yemen; full of Democracy and Dignity 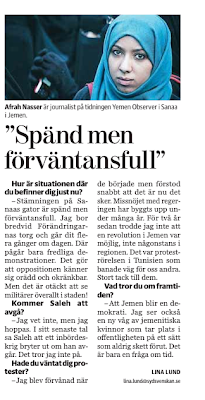 March. 24th - I was interviewed by The Daily Sydsvenskan, a daily-published newspaper in Sweden and I had the following interview, by Lina Lund


1. What's the situation like where you are right now?
What is going on at the streets? What are people talking about?
The situation in Yemen is really intense however people are optimistic about how things will turn out to be. I live right next to the change square and I go there most of the time and I see nothing but peaceful protesters. The streets in Sana'a are full with anticipation for what will happen next. Security in the capital is tight like never before. That makes people feel safe and sacred at the same time. On one hand, the change square is having good security from the gov'mnt to avoid any clashes between the pro and the against crowds. On the other hand, it's pretty scary to see soldiers everywhere in the city!


2. The protests started many weeks ago. Do you think Saleh will leave the power soon? What speaks for it? Whats speaks against it
I really don't know if he will leave soon or not. What I think is that no civil war could ever happen as he mentioned in his last speech. Yemenis have the kindest hearts and they live together in harmony and tolerance v. much.

3. When the uprisings in Yemen started, where you suprised by that they took place?
Did you belive in a revolution two years ago?

Yes I was surprised for few seconds but then I thought this was really coming. It's been building up for many years; the dissatisfaction with the gov'mnt from the people. Tunisians are the ones who let all this unleashed; around the whole region. Many thanks to them. 2 years ago, I would have never thought of any revolution anywhere in the region.


4. What do you think about the future? Will democracy arrive soon? What do the uprisings mean to the women in Yemen?
Yes, I do see a bright future waiting for Yemen; full of democracy and dignity for all its people in Yemen and outside of Yemen. Plus, I see a new strong empowered wave of Yemeni women coming to the public like never before. It's just a matter of time.