March, 31st - Another interview I had with Project Yemen Org. by Mareike. Photos taken by the photographer Abdulrahman Taha 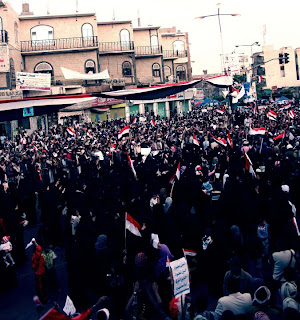 1-So first of all I was wondering, what role you think you personnaly play in this revolution?
Personally, the role I play currently is becoming as much as possible part of the voices of women in Yemen. For me, I have been always outspoken when it comes about women’s rights in Yemen and in the entire world. Today, in this revolutionary time for Yemen, I strongly feel the necessity to become more and more outspoken; exhibiting that Yemeni women do care about Yemen’s political situation which would definitely affect all its other fields; social, economical, cultural, historical, etc. Therefore, I do use media to tackle Yemen’s current issues and I speak/write from my heart to tell the truth; ‘fearing nothing and no one’ with a hope that a bright future is waiting for Yemen and all Yemenis; inside and outside the country.


2-I was wondering, what the everyday life of a female revolutionary looks like. Can you briefly describe that?
I think at the change square, there are four types of revolutionary females. First type: she is fully occupied by the situation and goes everyday to the square around 9 to 10 a.m. She chants tirelessly and participates in discussions and conversations at the tents there. Plus, she might contribute with activities in helping the revolution consistency. Then, she leaves around 7 or 8 p.m.. Second type: she goes there every other day, due to her inability to attend there every day, and does what the first type would do. Third type: she participates in the revolution online, using facebook, twitter and emails to spread the word, since her parents don’t allow her to go to the change square. She also donates with anything helpful for the protesters on the ground. Fourth type: she sits at home and just watches the revolution on TV; praying that victory is for pro-democracy protesters. She is revolting in her heart only and feeling not aware that she can participate.

3-There are many tents on change square, where people actually live. I was wondering, do women also live at the square? In Yemen alot of times you don't see women on the street after 8 o clock or so. Do the women of change square stay there longer?
Mainly, protesters at change square come from all streets in Sana’a and there are also tribes from outside of Sana’a are joining to protest. Regarding if they have been staying/sleeping at nights, at the square or not, it’s variable. From what I know, yes there are people staying there for days; protesting/living/sleeping there. They are people from Sana’a and other provinces who came especially for this purpose. In addition, there are people who also do that every other day and are establishing a sort of shifts between them and friends to pretest/live/sleep at the square. I have not heard about women doing that. In fact, I don’t think so that women have done that or might do it in the coming days.

4-There are many singers and performers at Change Square. Are there also women performers?
Yes, but they are just poets who deliver poems on the stage to the crowd/protesters. 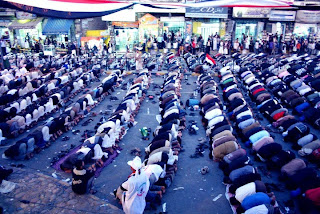 5-During the Revolution in Egypt, we witnessed men and women mixing on Tahrir. Are men and women separated in Change Square? If so, why do you think they have not taken that extra step. Do women pray at Change Square?
Yes, they are separated because socially and traditionally that’s the cases in Yemen. I think that step won’t happen anytime soon due to religious beliefs/laws in which it’s sinful to mix between women and men. However, women do pray at the square along with all the men. I prayed there many times.


6-In your interview about the role of women in revolution, you mentioned how you are also revoluting against your parents, or that this is also a revolution between generations. So would u say that generally speaking people at Change Square are only from your generation?
Generally speaking, protesters at the change square are of all generations in Yemen. You can find there, old, young, rich, poor, a parent, a teenager, a boy, a girl and all types you can think of. Plus, there are youth who comes with their parents and there are youth who come without their parents’ knowledge.


7-What role does relgion play in your life, and what role does it play at Change Square?
For me, religion is important where my conscious becomes more enlightened and spiritual. At the change square, chants are mixed hugely with prayers; assuring how protesters seek strength from Allah and how that’s important for them and the revolution. For me, it’s amazing and very spiritual.

8-In Egypt, in the aftermath of the revolution, we witnessed a debate about the role of women in politics, about how women are harrassed on the street..etc. Do you think it is likely that there will be, or maybe already is such a debate in general public in Yemen?
I absolutely think women in Yemen have already been a huge part of this revolution and I think that they are now more aware about their power. Therefore, I see that for women this awareness will last even after the revolution ends and victory happens. I believe, we Yemeni women, will revolute against any violations against us, in the coming years.

9-Yemen, as opposed to other muslim countries is pretty conservative as many women cover their faces. What role do u think that veil plays in yemen society? do you think the revolution will also change the way the role is perceived? Especially since one of the big icons, Tawakkol Karman, is not wearing the veil?
I honestly think that wearing veils in Yemen for women is more based on social and cultural basis than it is on religious basis. The revolution has changed women’s thinking about freedom related to politics in Yemen and maybe about their own freedom. In all cases, I believe that women must have an absolute freedom of choice to wear or not wear veils, regardless of is it time of revolution or not!


10-From my own experience, I learned that women, can be just as judgmental as men, when it comes to the veil. What do u think is the perception of Tawakol Karman, amongst Yemeni Women.
I really don’t know about women’s opinions about Karaman but for me I think she is really active in fighting the system. I really salute her activism.


11-How are you, as a person hoping to influence and shape the future of Yemen? Also in relation to women issues?
I really hope that Yemen flourish unbelievably in the coming years. I hope education is provided to all its people; men and women. I hope Yemen has zero percent of illiteracy so we could live decently with no violation against anyone’s rights. For me, journalism is a very key tool to address my nation’s issues. I strongly believe that good journalism makes a difference. I honestly work hard to achieve that.