A Young Yemeni Speaks out about Yemen’s Uprising

Who doesn't want to know what goes on in a young revolutionary gentleman’s mind from the Change Square in Yemen? Those youth have been protesting for almost 2 months in a row and they are about to shape Yemen’s history forever. I met one of the young protesters, Amar Hamed al-Bar last Thursday and asked him few questions. I regarded him as part of the many young Yemenis there and I was very interested to know what his answers were. Despite the fact that he is still 17 years old, he gave me an in-depth analysis of the situation; exhibiting a descent political awareness about Yemen’s current uprising. 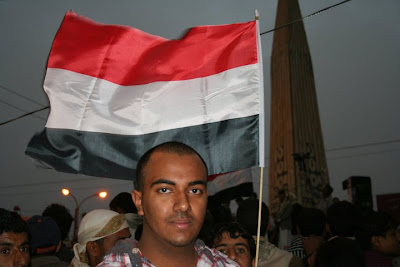 Afrah Nasser (AN): Since when have you been protesting?
Amar al-Bar (AB): Since one month I’ve been going to protest at the change square.

AN: Why are you protesting?
AB: I can’t sit and do nothing about Yemen while I see the situation is getting worse with each passing day. I really want to live and die here; in my country Yemen. I’ve seen how many members of my family have left Yemen and became immigrants abroad since they saw how bad life is really in Yemen. I don’t want to leave like them and I don’t want to become an immigrant like them. I don’t mind to travel abroad for study purpose, but I can’t stand the thought I could live forever outside of Yemen. I just want to live decently in my country; serving my country and my people. That’s my greatest motive to protest.


AN: Do you see that the protesting will benefit you?
AB: Yes, I see that change will happen definitely for the best and people will have a better life if the regime is changed. Mainly, I see that the changes that would happen will be for the youth’s interests. Changes will surly benefit everyone in Yemen, though. We have to have a life in Yemen without the rolling family.

AN: Are there many youth like you; who have the same opinions?
AB: Yes, and we do share our thoughts and opinions all the time in our tents at the change square. My group has 2 tents at the square and I donated one tent, so we have now 3 tents. One college lecturer is our mentor and we do always gather and discuss current topics.

AN: What happened exactly at the massacre on last Friday, March 18th?
AB: one of the neighbors who happened to be a wealthy sheikh had problems with some people. Apparently, there was a revenge issue between them. One of the Sheikh’s sons had information that the protesters might break the fence built in their neighbor and thought that their enemies would attack them on that day.
The sheik’s family armed men with weapon and made them fully prepared to attack before they might defend themselves. Later on, right after the protesters finished praying Friday’s prayer, the shooting began from the snipers. As a spontaneous reaction, some of the protesters started to break the fence. In the meantime, youth were getting shot and killed one after another by the snipers.
It was terrible and shocking. Blood was everywhere. I was in the middle of that and saw all what happened. It was a disaster. There was a black smoke coming from burning tires. We couldn’t see where the shots were coming from. Later on, we understood. In those moments, I was totally numb. I searched for the government’s security forces and couldn’t find them. They somehow disappeared while the youth were getting killed. It’s unforgettable day.

AN: Do you think that would happen again?
AB: No, I don’t think so, because the army now is with our side. It feels safer now.

AN: What does fascinate you the most about the protesters?
AB: I’m amazed and content by how the tribes joining the protest everyday are very civilized and never think to use the language of weapons. Keep in mind; 60 million weapons are in Yemen while we are 25 million Yemenis. And those tribes have left their weapons at their homes and came to the change square to protest peacefully. That’s a remarkable thing! They proved to us that they are the most civilized ones. All of the protesters came with the intention that they will protest peacefully and non-violently.

AN: Do you think Saleh will leave soon?
AB: Yes, I give him 2 weeks. If he didn’t leave soon, he will do it later but after shedding more blood. And I think he will leave after the protesters march to his residency.

AN: What does your family think of your political activism?
AB: They oppose me going to protest. I really face oppression from all my family. Nevertheless, I ignore them and I work hard to have my freedom to say and do whatever I want.