Last night, most of the Yemenis went to their beds with a broken heart after watching Mubark's televised speech where he assured that he is still clinging to his position as a president of Egypt. As a sign of solidarity with the Egyptian people, many Yemenis watched Mubarak with a great hope that he will resign and save his people all the headaches they are having because of him. 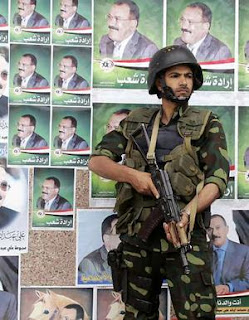 Early morning, on my way to office, soldiers' presence was VERY clear in Sana’a’s streets. Between one soldier and another there was another solider. Soldiers were everywhere, spreading “security” in case demonstrations occur. Hours later, one young gentleman facebooked me and told me about a peaceful march that was taking place in one of Sana’a’s streets. It was created by supporters of the ruling party of president Saleh.

Right after the march, Saleh delivered a televised speech where he announced that neither him nor his son might run for presidency. “I’m sacrificing my own interest for the sake of Yemen’s interest,” he spoke.

Hi speech comes in a very sensitive timing where crowds of people in many Yemeni governorates are preparing for “Anger Day” protest that will take place tomorrow. So far, tens of events were established on Facebook from Yemeni youth to protest tomorrow in al-Tahrir (liberation) square in Sana’a. Interestingly enough, the facebook events nature divides between two directions. One protest is against Saleh and the other is with Saleh. So,it is expected that two parties will be chanting two totally different messages, tomorrow.

Are the people who will be coming out to support Saleh, are they coming out willingly? Do this people have the descent life; poverty-free, corruption-free and unemployment-free life in Yemen? Do they enjoy the freedom to be with or against whomever they want to follow? Those are really important questions to ask.

If I have something to be grateful about in this tough time tough. The fact that Saleh did not shut down facebook or twitter – any means of social network websites- till now is really encouraging and is a sign of his respect to freedom of expression. Plus, very recently, a number of reforms were made by Saleh. In addition, journalist Abdelelah Haider who was sentenced for false accusations was set free by orders from Saleh.

What I know for sure is that the situation is REALLY NOT CLEAR in Yemen. The whole Arab world, including Yemen, is experiencing unprecedented time and no one knows how this all will really end up!