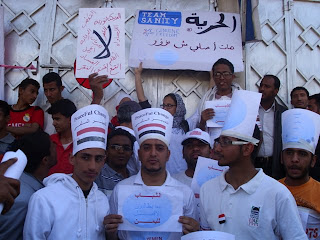 "I noticed today that media doesn't want to cover the positive stuff Yemeni youth is doing. It only wants to cover the negative stuff and that's awful!," those were the words of Ala'a Jarban, young Yemeni humanitarian activist and the founder of a youth-led initiative conducted today during today's protest "Day of Rage", in Sana'a. He was pointing at media coverage for Yemen' protests that took place today.

He lamented the poor media coverage for his initiative "Yemeni Youth Initiative for Peaceful Change" that's been organized through Facebook, almost two days ago. Essentially, the initiative aimed to represent civilized and educated Yemeni youth who will go on rally protesting for a change without spreading violence or chaos. So far, around 100 people joined the initiative's Facebook group page and around 30 people actively, on reality, interacted with the initiative's message. "My idea is this; we should all go together protesting at 9:00 A.M. and take with us brooms and cleaning tools. Basically, while the protests take place, and even after the protests finish, we would start cleaning the streets; the place we protest in as well. We will be protesting for our rights as Yemenis who love their country, away from political parties, away from creating violence acts, and away from creating any sign of destruction," Jarban stated in his initiative's introduction on Facebook, two days ago.

Yesterday, the initiative's members gathered for a meeting to discuss how to implement their message. "over 30 people attended the meeting today. That's great, but we need more. Invite your friends to attend our demonstration tomorrow," posted Abdulaziz Al-Sakkaf, one of the members, on the initiative fb page right after the meeting. 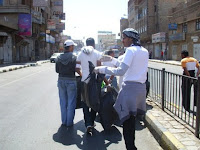 During the "Day of Rage" protest that took place today, the initiative realized its peaceful message on reality as all its members agreed. In fact, it was done successfully! The guys and girls cleaned the streets and made sure that the people around them know about their peaceful message. Even though media didn't pay them a sufficient coverage, the youth are determined to continue their efforts, aiming to change the stereotype thinking about Yemeni youth.

"It was a very touching day to us and to many people! I felt so proud while we were cleaning one of our country's streets after the protest finished. It was absolutely honorable when passing-by people were thanking us, greeting us and even giving us hugs which were full of pride towards Yemeni youth. I felt so proud while I was heading home and the street was so clean," Jarban said. 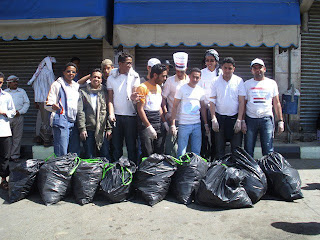 "We were few numbers of people, but we really changed lots perspectives toward Yemeni youth and toward peaceful protesting that merely aims to call for a better change without causing violence!I really hoped that we would have a better media coverage, since our goal was very sincere and honorable. I really think that the whole world should know about it since it can influence lots of people. Regardless, today was only the beginning, and what's coming is even greater," Jarban concluded.