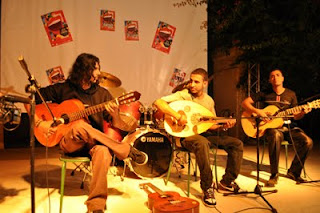 That was part of celebrating "World Music" day that France celebrates annually, every June.

Some of the bands’ names were Imgo, Element, Blast boys, Bimb Music and many more. The bands wowed the crowd with their performances that consisted of several music genres such as Rock and Roll, Hip hop and dancing segments. On Monday, the bands performed, letting the crowd vote at the end for their favorite bands who were supposed to be the winners and perform on the next day.

Element was the winner after it had more than 100 votes and it was the star at the next day. Moreover, there were a segment of “break dance” performed the Blast Boys who entertained the crowd with their outstanding performance. The French Cultural Center’s director, Joël Dechezlepretre expressed his amazement by the Yemeni bands and how wonderful preferences they did. He also said that there might be other projects related to these bands in the future.