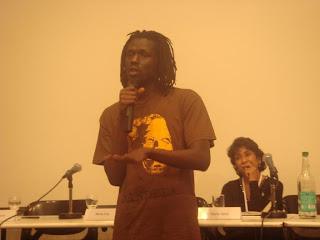 "I chose to love so i could live long ... love makes me stronger". Those were the words of Emmanuel Jal in his latest song "Hai". He was my patron during my stay in Switzerland. As simple as it is, those simple words tell a lot about how genuine he was! He opened my eyes about the real meaning of peace and how a person could have a great deal of resilience.

Jal used to be a war-child but now he is a remarkable musician, spreading powerful messages about peace via his music. He was my patron and 22 other participants; during a workshop held by the British Council in Switzerland. It was a workshop on "conflict resolution through theater and arts". He was the perfect person for that theme. He proved to all of us how arts; music, theater, films, books, photography and any form of art, has a great importance in healing individuals and communities. It was an eye-opening experience. It changed me to the better. I know now that I'm more enlightened about one's "inner wars" and how art could play a powerful role in bettering negative situations.

Next month, Nov. 5th, Jal will perform in Copenhagen, Denmark Dox Film Festival 2010 and hold many other activities during the festival and my heart is already there. He is a great example of how we could think with our hearts and use our knowledge for construction instead of destruction."When you touch people's minds with science, the effect is temporary, but when you touch people's hearts with arts, that's permanent," he advised all the participants during the workshop.

In simple words, I'm so thankful that I had the chance to know him in person and I know now that I have to choose to love..because it makes me stronger.
http://www.youtube.com/watch?v=OgsSSJrb9ts