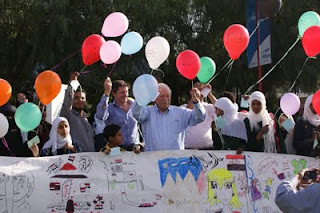 Enhancing Yemen’s educational sector and paying more attention to improving the educational sector are the essential solution for solving Yemeni children and youth’ issues. Those were the words of Charlie Mc Cormack, Chief Executive Officer of Save the Children (SC), US. Last Tuesday, at a press conference at SC building in Sana’a, he outlined his observations on Yemeni children’s issues and what the organization is working on to better their situation.

The organization has been working diligently in Yemen since 1963 to improve Yemeni children’s issues, focusing in carrying out the United Nations’ “Convention on the Rights of the Child”, that Yemen is signatured about. When almost half of Yemen’s population is under 18 years old, organization like the Save the children is much needed.

SC’s main areas to operate on are education for children, child protection, strengthening civil society that’s working in child rights domain and other ears. Most importantly, SC is currently working with many programs in conflict-affected areas like Sa’ada governorate in the north of the country and other ears. The programmes work in close coordination with partner NGOs as well as the Ministry of Youth and Sports.

More notable, the organization has a focus on inclusive education (IE), including a program in the Somali refugee camps of Kharaz and Bassatin with support from United Nation High Commissioner for Refugees (UNHCR). It is also working with Somalis and host communities on access to and utilization of basic services such as schools and health clinics in Sa’ana with support from Bureau of Population, Refugees and Migration (BPRM). 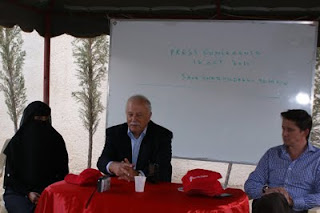 SC is an international alliance of 27 SC associations, working in 120 countries in the developing world and is globally the leading International NGO (INGO) on Child Rights. SC’s work is to ensure children’s rights and to deliver immediate and lasting impact for children. In addition, SC was the first international NGO working in Yemen and has been operating since its establishment on 1963. Currently, SC IS one of the largest NGOs in Yemen, with over 120 staff and programmes in Aden, Abyen, Lahaj, Taiz, Ibb, Sana’a, Hajja, Amran and Sa’ada.

SC is about to launch a global Child Survival Campaign, called ‘Everyone’, and Yemen will be part of that with many programmes. The initiative will aim at improving child mortality through health and nutrition programming and advocacy.

Mr. Mc Cormack’s visit is to examine how the Child Survival Campaign is processing and also to monitor our other activities can be better supported.