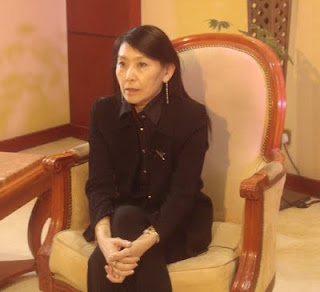 International Fund for Agricultural Development (IFAD), a specialized agency of the United Nations to finance agricultural development projects, has been financing development initiatives in Yemen for almost 30 years, focusing on funding initiatives supporting the country’s development strategy, promoting crop intensification in the most suitable areas and building institutional capacity. Moreover, it focuses on initiating programmes and projects addressing the isolation and marginalization of poor rural people and their exclusion from the benefits of economic activities. In her recent visit to Yemen, Yukiko Omura, Vice President of IFAD, along with Dr. Fathia Bahran, IFAD’s Country Program Officer- Yemen Near East and North Africa Division Programme Management Depart., Dr. Nadim Khouri, , IFAD’s Director- Near East and North Africa Division Programme Management Depart. and Omar Thafar, IFAD’s Country Program manager launched very crucial projects that IFAD plans to ultimately boost and enable rural people to overcome poverty through their efforts and governmental and private sectors’ efforts as well. Yemen Observer met with Ms. Omura and made the following interview.

Yemen Observer (YO): What’s your impression on your latest meetings with ministers and officials?
Yukiko Omura (Omura): I have met with many governmental officials who have been all extremely hospitable and welcoming and I had very good meetings with them. I can see that they are very eager to make success of the projects IFAD is initiating. Since they are very important partners for us, I’m very much hopeful that it will be a great success.

YO: What are the three main projects you’re currently initiating?
Omura : The first project is Agriculture Value Chain program which will begin within one month. It will focus on coffee, vegetables and honey and will be worked throughout 8 governorates. It’s budget is $40 million from IFAD, European Union (EU), Islamic Deployment Bank (IDP) and Yemeni government.
The second project has two components and will begin in January, 2011. One is Fishery Value Chain and the second supports fishery resource management. Its budget is $20 million which is confirmed but perhaps more fund will be given in the coming months.
The third project focuses on rural employment and its budget will be $100 million from IFAD and other donors.

YO: IFAD has been working in Yemen for many years. What do you think IFAD’s most challenging obstacle in Yemen for getting its goals achieved?
Omura : There are many obstacles. Since we are focused on agriculture, I think our biggest challenge is water supply and I would like to see irrigation becoming a big supporter of agriculture in a big way because we have a scarcity water situation in Yemen and we have to mange that water supply extremely carefully. That’s a very big challenge.

YO: What do you think is the most sufficient solution for Yemen’s water scarcity issue?
Omura : The various technologies for water supply are very expensive and time consuming. Perhaps the quickest and cheapest method is making a system where somehow we collect rain water so that we don’t let them drain away and keep that rain in a tank as a supply throughout the year. That will be an initial one. Because Yemen does get rain except it comes too fast and quickly drains. Collect the rain water and use it for irrigation but also you have to look for other ways dealing with salty water that is sea water. Again that is extremely expensive. But there are new crops coming out where they can grow with salty water. So we have to keep on doing research and development to support that.

YO: Who do you think should work hand in hand to deal with the water scarcity issue?
Omura : Governmental, private sector along with IFAD have to work hand in hand. It’s not something optional. All of them have to. That’s very important because if you look at how development concept works, it’s integrated between all parties. %100 of governmental efforts or %100 of private sector’s efforts, neither could work. Now, it is the error of public private partnership and it’s only through proper partnership with the government agencies and the private sector companies that are willing to take the risks and be countable for their risk ownership, we will have success in dealing with this very difficult problem.

YO: Another crucial issue Yemen faces is the internal immigration. How do you believe that internal immigration from villages to cities can affect Yemen’s agricultural development and the imbalance that will occur?
Omura : It’s a very typical pattern of developing countries not only in Yemen. When you have an unemployment high rate and poverty situation in the villages, it is natural that the young people come to urban areas, looking for opportunities. What we want to do is to turn it around and make the farming areas an opportunity for them so that they will stay and the young people become successful farmers. It’s a long term investment or solution not just for this year or next year for Yemen and for the world as well.

YO: Yemen, as a developing country, can its income depend on its agricultural products and rural areas products?
Omura : I think what Yemen needs is diversity of dependence. Yemen has oil but it can’t rely on oil only all the time because the market of the oil goes up and down and it’s unstable market. So, Yemen has to depend on different resources as well and agriculture is one of them. So we really need to develop the farmers. The other resource is that Yemen has beautiful craft ship that Yemen could export. With more economic stability, Yemen has beautiful historic sites that definitely can attract tourism. There are lots of opportunities. Fishery sector for me is part of agriculture over all but if Yemen does the right fishing and packaging, Yemen could easily be exporting to the whole world.

YO: If you have a word for investors to invest in those discarded sectors like agricultural sector and fishery sector, what will you say?
Omura : I think I will tell investors to go, visit and talk to micro finance banks that I just went to visit. Today, they have a tremendous success story with no default. That should tell the investor something which is that you can rely on these people and they are serious about developing business. They just need some boost and support to kick start and they will multiply. They have good opportunity.

YO: What can you say for anyone who underestimates farmers, villages and agriculture’s importance?
Omura : Usually people look at a small farm as if it is insignificant but if people add all these farms together, it’s a huge land and a huge production. So the trick is to turn these small farms into big production’s sources and make farmers commit to market and allow them to provide supply of food, fruit, vegetables and crops for the country as a whole, not only for themselves. That is the value change proposition that we are providing and through that they will not only become self-sustained but also they will become economically independent and continue to grow as enterprises.

YO: What do you think distinguishes Yemen from other developing countries in terms of Agriculture sector?
Omura : Right now Yemen is importing a lot of agricultural products which is a shame and a pity because Yemen can grow in its lands. I hope Yemen not only to think of saving status but also how to create additional income that could be substituting that with Yemen’s own products and stop importing. It’s a pity when Yemen can grow many things so why spend more money importing.

YO: Who is responsible for that you think?
Omura : I think everyone is responsible. It’s not just the government or the farmers. It’s everyone’s responsibility and that’s what we are trying to do; bring them all together and allow these small farm holders to grow.