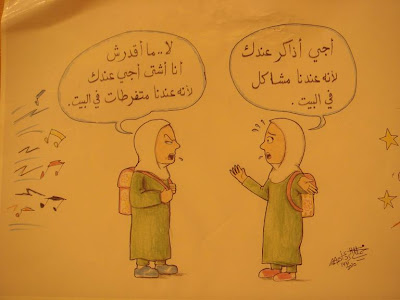 In Yemen, where most females are illiterate, there is a promising future for girls’ education. Statistics show that a 46% literacy rate among young women, a great deal less than young men, may increase 17% in a few years.

These statistics, provided by the “Supporting Girls’ Education” project and funded by U.S Middle East Partnership Initiative (MEPI), Lebanese American University (LAU) and Family Social Association for Development were collected in rural areas in 2010, since primary and secondary school enrollment as well as gender gaps appear to be much more severe in rural areas of Yemen.

In a seminar held last week, the project’s officers presented their accomplishments through the project’s activities. These included a combination of workshops, awareness seminars, school visits, training courses, poster exhibitions, as well as arranging meetings between parents, students, and teachers in rural areas.

The project began in Beirut, Lebanon and later on consisted of specialized institutions that encouraged young leaders from Saudi Arabia, Bahrain and Yemen. The project was implemented in Yemen this year as a result of such institution.

FAD carried on the project during 2010, targeting Bani al-Hareth provinces in the project’s first phase. Here it established students’ councils to help parents understand their sons and daughters perspectives on education. It also established fathers’ councils to discuss educational issues related to their children, especially girls’ education issues. The project has many plans that are to be executed next year.
The seminar presented the results of the project and the praise it received from the parents, students and teachers. “We witnessed 30% increase in girls’ enrollment in our school throughout the project. That’s a great testimony for the project’s success,” said Abdel-Malek Hantal, principle of al-Fajer al-Jadid school

The project also consisted of programs that have been undertaken to encourage girls and parents to have a better understanding of the issue’s importance. “I was about to drop out of school but when I participated in the project’s activities I changed my mind. I became more aware of importance of education. Of course I faced lots of problems but I knew from the project that I should fight and be determined to finish my education,” explained Jihad Ahmed, 18, female student at al-Fajer al-Jadid school.

During the intensive meetings, the students, parents, and teachers discussed problems and solutions related to girls’ education and how to improve the situation. Poster exhibitions helped all participants to comprehend the issue’s significance through visual art.

One simple reason that led girls to leave schools were lack of toilets and parents didn’t approve of letting their daughters be out of home for long hours without having access to restrooms. To remedy this problem, the projected consisted of building restrooms in schools in rural areas with funds from the project and donations from the families themselves. Next year the project will focus on building restrooms in existing schools in an even greater capacity.

In addition, wealthy donors provided land in the Bani al-Hareth province for the Ministry of Education to begin construction of new schools.

At the seminar, a short documentary about the project’s processes was screened