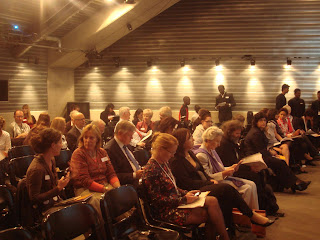 *This article was written & published in The British Council's website.

“Where are all the people who want peace?!”, that was my words spoken loudly in a room full with decision-making personas who are heads of international organizations, working almost all around the world in close interaction with people who are Internally Displaced People (IDP) and other communities.


On 20 September, I spoke in a conference held by the British Council in Switzerland at the International Committee of the Red Cross (ICRC) Museum in Geneva, called “ACT 2: The Role of Cultural Relations in Addressing Conflict: Re-establishing Normality.” Some great speakers lined up and were showcasing examples of how cultural relations can be used as a tool in conflict prevention and reconciliation.

The conference at ICRC was a prestigious one that came after what we, young participants from around the world, learned during the workshop by the British Council in Switzerland. It was in Geneva, which is now the center of human rights, to demonstrate that cultural relations could be easily used as a tool to make a difference and build peace after conflicts. Specially, the conflict’s consequences like alcoholism, rape, domestic violence and so on. So, it was not necessary about conflicts’ issues themselves. However, it was a great opportunity to let organizations’ decision-makers know that paying more attention to arts in developing countries could be sufficiently effective in healing its communities’ post-conflicts issues.

At the conference we, the participants, stood up and each one expressed his call to the organizations through something artistic or/and cultural. My segment was holding a poster that said in English and Arabic “where are all the people who want peace?!” 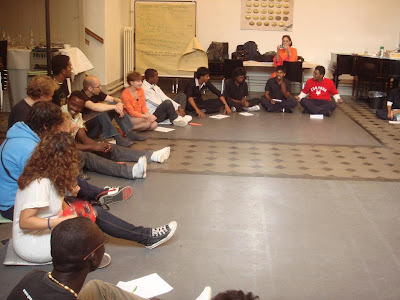 That came after an eye-opening and exciting one week workshop done by the British Council Sri Lanka, the Pan Intercultural Arts and UN institutions in Geneva for 11 young people, including myself, aged 18-25, coming from post-conflict regions around the world, like Rwanda, Russia, Zimbabwe, Peru, Kenya, Israel, Georgia, Sudan and Yemen. We travelled to Switzerland in September 2010. We were trained for a week with Pan Intercultural Arts, Emmanuel Jal and Shakthi on how to use performance techniques to address conflict and be able to use what we have learned after having returned to our own country.

In simple words, in one of its kind initiative, the British Council in Switzerland aimed to show that culture could play a key role in expression. They highlighted how cultural relations make a difference in conflict prevention and resolution. Moreover, the workshop was a chance of bridging between different cultures. 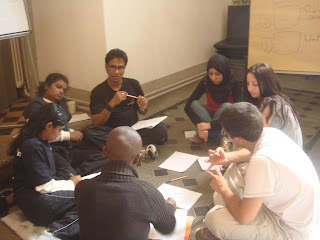 Essentially, the British Council main goal was to let youth from different countries interact culturally and share their issues so we all could get inspired and translate our new ideas into reality in our home countries.

During the workshop, I got to know young people from different parts of the world who all are diligent activist, working tirelessly in domains related to art and using it in reconciliation after conflicts and it was amazing the simple methods they used to build peace within their communities. For example, I had the honor to meet two remarkable young men from Rwanda who survived the genocide in 1994 that had a mass murder of an estimated 800,000 people. Those two young men have lost their loved ones by hands of their neighbors and people they know very well and yet they have forgiven them. In fact, they arranged a program in Rwanda called “Survival Youth”, making youth use theater to forgive, heal and build peace within their communities. They do plays that encourage people to forgive and live in peace.

That is to say, they used art in reconciliation after the destructive genocide that not only killed their loved ones but also destroyed their young souls. “It’s extremely hard to forgive the people who your parents gave milk to, while he gave you the blood of your parents. Nevertheless, I have forgiven them.” said Hyppolite Ntigurirwa, 22, from Rwanda.

For me, when I was asked to do a scene that tackles an impressing issue in my country, I immediately got up and arranged a demonstration scene consisting of demonstrating people, siege and police, which reveals the environment that I came from. That is to say, I belong to people who are discontent about their country’s issues. However, I realized that creativity should not face censorship. Later on, interestingly, I found out that that was called Theater of the Oppressed, showing a relation between powerlessness and powerfulness and it was put in one simple scene. 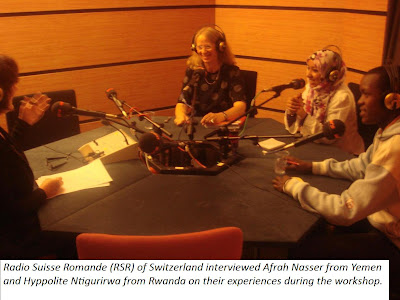 Throughout the workshop, all the participants got to know how arts could be a tool to heal communities’ post-conflicts issues and build peace within them. We shared ideas on how to strengthen our communities’ bond through arts. Since youth are future shapers, their arts do really matter and will definitely have a long-term impact. We all realized that arts are the simple yet powerful tool in expressing impressing issues when it’s hard to communicate them directly. We did many exercises that definitely inspired us and brought out the best artistic capacities inside us.

On the second day of the workshop, we watched “War child”, a powerful documentary about Emmanuel Jal, a Sudanese musician and former child soldier. When he was a child, he used to be a soldier in the fighting of Sudan’s civil war in the 80s. Now, through his music he heals his soul from what he had experienced. Moreover, he is a true humanitarian activist, being on a “Lose To Win” challenge to build a school in Leer, Southern Sudan. Since December 2008 the musician has been eating one meal per day, skipping his breakfasts and lunches to raise funds and awareness for the school.

No doubt, Emmanuel Jal is a role model for young people who are concerned on humanitarian issues. We were so lucky to have a class on leadership by him on how to climb the top of leadership pyramid. It was very informative. At one time in his class he told us, “never underestimate arts because if you touch people’s minds, that’s, but when you touch people’s heart that’s permanent.”

Another realization that I had was in group discussions with all participants, we discussed a number of topics. One of them was about gender issues and I realized that women around the world have the same concerns even if they are living in different countries and continents.

With passing days, we all got to know about Forum Theater where audience members could stop a performance, often a short scene in which a character was being oppressed in some way. The audience would suggest different actions for the actors to carry out on-stage in an attempt to change the outcome of what they were seeing. This was an attempt to undo the traditional actor partition and bring audience members into the performance, to have an input into the dramatic action they were watching.

Most of the participants did so and intervene during the Sir lanki Shakthi group’s play. It was a simple yet profound play. They used the forum theatre style to understand and explore complex social issues, which were post-conflicts’ issues, within the communities of the actors themselves. The first intervention was mine. It was so good that the British Council chose it to be performed one more time at the conference when the play was performed there.
After five days of training on theater mechanisms, at the sixth day all the workshop’s participants attended the conference at the ICRC. “Before I came to the workshop, I knew that I was about to meet young leaders. What they did say and demonstrate throughout the workshop assured me how arts could be a healing method for post-conflict’s issues. I always go to events and tell my story and that usually drains me but this time things were different. Just by getting to know all this young leaders, I got an enormous energy of how to use arts as therapeutic method,” said Jal at the conference.

Later on, we all, accompanied by Jal, did a brief artistic presentation consisted of powerful spoken messages, dancing, music, and a conclusion message to the attendees when we asked them “We care, do you care?”. At the end of the conference, Jal performed one of his songs and cheered all the attendees.


On our last day, 21st September, there was an evening at the Grütli Arts Centre in Geneva with Emmanuel Jal ,Shakthi, and all of us, the workshop’s participants. A wonderful crowd showed up after knowing about the evening from announcements in cultural centers and facebook. Shakthi performed their play and Jal perfomed several songs of his. We all joined him, dancing and assuring the success of the whole program. Audience left with warm smiles in their faces. At the end of that evening people lined up next to Jal, letting him sign on his book “War Child”, (an incredible and moving memoir-cum-story) . To sum up, the workshop was about demonstrating that there is no better way than art to be a medium between cultures. Diverse communities must not clash. Their way to do so is through arts which help them in learning about difference, in being comfortable about it and in living together peacefully. The whole experience was really about thinking outside the box, pushing one’s limits, and working hard to make a difference. What I know now for sure is the workshop has ended but it was a beginning for greater things.