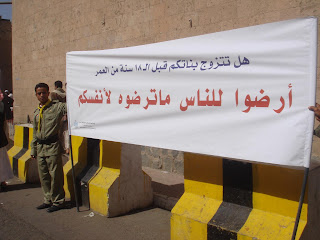 There have been new details from the Sisters Arab Forum for Human Rights (SAF) in Yemen about the child bride, Elahm Shoa’ai who was only 13 when she died of internal bleeding. SAF maintains that after Elham’s wedding night, her husband and brother took her to al-Huda clinic where the husband asked the attending doctor to open Elham’s hymen, which he was unable to do. . The late Elham refused.

Then, her husband took Elham home and forcefully put his fingers into her vulva and removed her hymen. That led to a severe injury and hemorrhage and great damage to her vagina. When Elham fainted, her husband took her the next day to a hospital where he was told not to have sex with her at all. However, the husband took her from the hospital to an Islamic sheikh in order to recite verses from the holy Qur’an, claiming that the late Elham was possessed. All this time, Elham was severely bleeding.

SAF also maintains that claims that Elham was 18 years old when she passed away are false. Sources at the village where Elham lived told SAF that Elham was 13 or 14 years old where she was married. Her eldest brother is only one year older. In many rural, poor and illieterate communities, marriage age is not taken seriously, nor is it officially recorded. Elham represents many other similar cases.