Youth donates for the Yemeni center for Autism 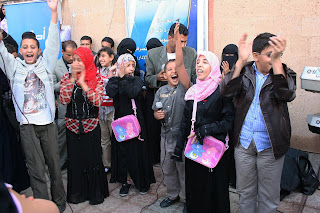 Each year, the world celebrates the 2nd of April as World Autism Awareness Day pledged by the United Nations (UN). It’s an internationally celebrated day and the whole month is dedicated to increasing awareness and spreading more knowledge and light into disorder that is normally kept in the dark. There is little said about Autism in Yemen, which makes it even harder to put it at the center of discussion; however, there are serious efforts that have been made by committed groups who want to enlighten the whole world about this disorder.

The Yemeni Center for Autism held a charity festival, intended to raise donations for its autistic kids and increase awareness about Autism in Yemen at Saba University, last week. There were donations from college students and guests along with brief lectures on the subject matter. At the end of the festival, organizers announced an upcoming seminar on Autism to establish a series of campaigns throughout Yemen’s providences. This festival is the third that the center has conducted.

“There is little known about Autism in the whole world, not only in Yemen. It used to be defined as a mental disability but now it’s been looked at differently. There has been great attention to Autism as a neurological disorder that has minimal medical knowledge," said Souad al-Eryani , the center's founder.

Yemen Autism Organization was founded in 2005 and its founder, al-Eryani, herself has an autistic girl. "This kind of campaigns facilitates increasing awareness on this matter. We see lots of interactions from parents who come to us, seeking knowledge and help. Parents are more able to diagnose their autistic kids when they are only 18 months old due to their increased awareness. We used to have kids coming to the center at an older age but now parents bring their sons and daughters at a very young age. Things are getting better," added she.

The center hopes to extend its work, capacity and reaching but that’s not possible unless donations and partnerships from other bigger local and international institutions be in hand working with the center. "We seek to be the best center and each year we receive more and more autistic kids so it's a challenge to keep up on being the best while we have this increasing number of autistic kids, " said she.

However, the biggest challenge is to increase awareness on a public level. On the other side, the center aims to have an active network that promotes awareness on this matter throughout all places in Yemen. "Hopefully our center becomes a center point where others would begin. There has been already established in the Arab world a Network for Autism to provide rehabilitation for autistic children and conduct raising awareness campaigns and programs for diagnosing and early intervention throughout the Arab world and I'm one its founder. I did many partnerships with many sides locally and internationally. We have been working hand in hand with them to provide best services for many autistic children and I really hope to provide best services for autistic children in Yemen as well," added al-Eryani.

At this moment, the center seeks more volunteers to join and contribute as socially active individuals who will be great assistance for the center's success.


Mr. Ahmed Ali al-Najar, Chairman Board of Trustees of Saba University, expressed his delight to have the event at Saba University. "Our university has always been engaged in such events. We encourage charity work and events that increase awareness on unspoken disorders like Autism. This represents one of our social activities in raising awareness to the public on unspoken disorders," al-Najar said.

Dr. Mohammed Yehya al-Mahbeshi, Assistant Professor, thinks humanitarian work is crucial in uplifting veils on the Autism disorder that is rarely spoken about. "When we knew about the motive behind this event and how it was humanitarianly intended, we immediately welcomed cooperating with them. Charity work has been always in Saba University's agenda. We hope that the center gets its goals achieved and we always would like to participate with the center or any other humanitarian centers."

Autism: Autism is not a disease, but a developmental disorder of brain function. Do you think your child might have Autism? Here are a couple of symptoms to help detect if a child could be affected by Autism:
• Avoid eye contact
• Not liking cuddles
• Inability to make friends
• Plays alone
• Inability to sustain conversation
• Unusual language
• Overly focused attention on specific objects
• No two-word phrases by 24 months