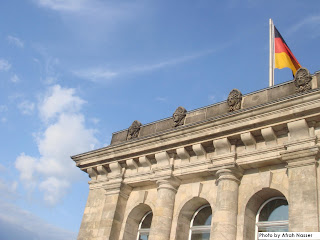 There are currently around 3,000 Yemeni students in Germany; almost half of them are in foreign exchange programs, according to Dr.Abdulkarim al-Rawthi, deputy minister of programs and the international cooperation sector at The Ministry of High Education. The Ministry of High Education in Yemen organizes scholarship programs for Yemen’s most distinguished students In pursuit of higher education. As part of its programs, it offers undergraduate students scholarships to obtain their first degree from prestigious universities in Germany. It is very competitive and the students must demonstrate a high level of competence.

The scholarship winners are some of the most dedicated students from all over Yemen. They are modest middle class citizens who studied hard and made the highest grades to compete for government funded scholarships to study in Germany. There were many well-deserving students who applied and the competition was very intense. Not all applicants could receive scholarships. Life seems promising for the students who won scholarships. Their dreams were about to be realized. They were being given the chance to prove themselves and be honorable ambassadors for their country. They seemed like the most fortunate students who had it all. However, the young students were not prepared for what came next.

Once the students arrive in Germany, they have to overcome certain challenges enrolling in college and throughout their college experience. The language barrier is one of the biggest obstacles any student has to face. Most of the students have little or no knowledge of the German language. So, he or she must be enrolled in a German language institute immediately upon arrival. “One of the problems is the German language. That is to say, many students have a low level of proficiency in German because they had not much time to learn the language,” says Omar, a Yemeni student studying in Germany. “They do things quickly because of the pressure of the immediate enrollment for colleges so the students could save time for the first year at college which is for preparation only. In addition to that, the students could not miss the preparation year at all otherwise they could be deported, if it passed two years for his or her residency in Germany without entering college. Accordingly, the students rush to enter college without having the sufficient knowledge of the language and the culture of Germany.”

Naturally, the students had to handle the situation with each others’ support. That is why the Yemeni Students Union in Germany was established. Unfortunately, the union, too, did not provide the support that the students need. “I heard of a Students Union but honestly I didn’t see any support from them. Its main role was supposed to help the newly arriving students with their residency and enrollment process but unfortunately nothing of that happened to me or anyone that I know of. I wish it had a real function. That would have saved me lots of stress,” says Adnan, another student.

The alternative choice for the students had to come up from their own social network which has been just as futile as the assistance they got from the Cultural Department at the embassy or the Students Union. The relationships between the Yemeni students themselves have been souring as well. “I don’t want to generalize, but there is no sense of cooperation or support among us,” adds Adnan. “For example when I first arrived in Germany, I knew nobody. Even the guy who received me at the airport was an acquaintance of my neighbor in Yemen.” The unexpected pressures of life in Germany took its toll on the students. That was reflected in the students’ social interactions.

“I blame all of us--the students--for our current unfriendly relationship and I really think we have to work on that,” says Amina.

Germany is one of the most developed countries in the world, a reality which challenges the students’ skills and ability to integrate into the local way of life. “It is very problematic for us to live in a very new society and a unique one like the Germans’. Certain elements have a high priority in Germany whereas they don’t in Yemen. Literally, we are still discovering ourselves,” said Muhsin.

“Nevertheless, I wish every group of the Yemeni students who come to Germany had a seminar where they were told about what life in Germany would be like,” he continued. “I wish I knew more about Germany before I came because that would have been very helpful.”

The German House is a part of the Goethe Institute and the German Foreign Office in Yemen. It has been offering a language program, dialogue library services, and cultural activities for many years. Mr. Guido Zebisch, the director of the German House, points out the reasons why the students can’t seem to ease themselves into life in Germany: “We find that most of the students are leaving for Germany too early, without taking German [language] classes up to a sufficient level, and then they do not do well in Germany as a result,” says Zebisch. “The German House is always ready to offer integration courses that give a deep insight of how life in Germany is; where life is expensive and other priorities come up first (like big city life, or like having to cater for themselves). The German House offers German classes at a far less expensive rate than any language school in Germany; therefore I can only encourage students to make the best out of learning German while still in Sana’a, and start very early.”

“Life is very expensive in Germany and the money we get could hardly cover our minimum basic needs,” says Saleh. “The fact that the money is sent in dollars makes it less than what we really need. Plus, the frequent delay in giving us the money is really stressful. If a student tries to find a job so he could earn extra money, he will be very late with his studies. It’s hard trying to juggle that.”

Dr. Rawthi says that the students’ demand for increasing the amount of the financial aid was reported to the Parliament, and a reasonable amount of money will be added for the students in the very near future.

Is it really worth it? And what could any student gain from having such a challenging experience? Dr. Abdulrahman al-Ma’akhadi, a Yemeni dentist and a PhD holder from Heidlberg University in Germany, points to how his 20 years spent in Germany opened up lots of doors for him, and especially how his studies abroad helped him in life.“Regardless of all the hardships I faced as a young student who was sent on a scholarship, I don’t regret it a bit,” says al-Ma’akhadi. “I studied very hard and worked very hard because it wasn’t easy at all. The whole experience changed my life. I got back to Yemen recently and I’m willing to practice my career in my own country because it is time for me to give back.”