Many women in Yemen don’t know about regulations against harassment 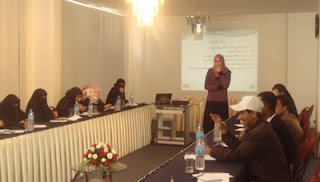 So much has been said about harassment against women in Yemen. Discussions by governmental institutions, civil society initiatives and all nationwide mass media have analyzed the matter either superficially or in depth. The most distinguished approaches are the ones that hit the deep core of the problem and brought certain solutions or mechanisms to fight the problem.
Harassment against women study conducted by Athar Foundation

A recent study showed %99 of women in Sana’a undergoes sexual harassment from males in the streets. The study covered the range of sexual offensive behaviors in the streets only which are found threatening or disturbing by most of the study respondents. The respondents said that they faced intended disturbing or upsetting persistent and unwanted sexual advances behaviors from men in streets where typically disadvantageous consequences are potential to the victims.

Athar Foundation for Development conducted a baseline study on street harassment against women in Sana’a during April and August of last year. The Middle East Program Initiative (MEPI) funded the study. 540 women from 5 districts in Sana’a governorate participated in the study. The respondent women consisted of schools and universities female students, public and private sectors employees and housewives who were at the end of the study introduced to knowing about existence of regulations on harassment felonies and existing toll free number for harassment cases complaints which is 199.

Last month, the foundation organized a discussion panel to present the study’s results and gather related recommendations to establish real mechanisms that will aim at combating the problem. A project on implementing measures to reduce the problem is the foundation current effort. The project is due to take place during February and March and again it will be funded by the Middle East Program Initiative (MEPI).

The session’s participants consisted of governmental bodies, educational delegates, civil society representatives, lawyers and media representatives. One of the main participants were L. Colonel Mr. Abdulaghani al-Wajih, the commander of patrol police in Sana’a and the secretary general of police club, Mr. Hussein al-Faqih, the director of operation administration at the Ministry of Interior. Other religious personas were invited but unfortunately they were absent.

At the session's beginning, the study’s results were put on show then the participants presented their analysis on the issue. At the end, each participant presented key proposal that will be under a coming project done by the Athar foundation in implementing actual measurements to fight the problem.

The Study’s Results
Besides that %99 of women in Sana’a undergoes sexual harassment from males in the streets, the study also had other detailed results. The survey sample was distributed in Maeen, al-Wahda, al-Thawra, Sho’ob and al-Tahreer districts. The targeted women’s age ranged from 20 till 50 years old. Most of the complaints came from the age 20-24, universities students making them have %51.9 complaints of the final sum and the least complaints came from women aged 50 and older. The harassment types’ nature varied from verbal sexual offensive remarks, physical touching to sensitive or insensitive parts of women’s bodies, stalking, to methods beyond all what were mentioned, leaving a tremendous psychological impact on the women let alone the social impact that in certain cases would lead many girls to drop their education, whether because of explicit reasons or direct reasons.
The study central objective was to provide actual and concrete statistics on sexual harassment against women in Sana’a’s streets from the female respondents’ perspective. In addition, the ultimate objective was to coordinate with local authorities to develop a complaints and reporting system in order to preserve privacy and dignity of victimized women and their families.

88.5% of the women assessed the issue to have a huge magnitude that is expanding with the passage of time. The women’s perspective on the motif behind the issue is the enormity of the free time young males have.

In most cases, a collective unspoken agreement exists among Yemeni girls regarding the reaction towards such harassment. The stigma is too shameful to be delivered. 84% of the women ignore harassers to avoid embarrassment. Moreover, only 48% of the women inform male relatives about the issue.

The Study Key outcome
Harassment against women in one way or in another is an international phenomenon. It occurs in any country and is not only happening in Yemen. But what distinguishes its occurrence in Yemen is how it is an unspoken matter demonstrated by the study’s respondents who had no idea about the availability of regulations: women can turn to the government to take their rights from harassers. In light of that, ignorance about existence of laws to deal with the issue is the most significant result of the study. 63.3% of the respondents don’t know about regulations and laws’ existence dealing with sexual harassment.
Anticipated Project
On the road to enlighten and empower women with their rights, the hoped-for effect is expected after the coming project on combating street harassment against women in Yemen done by Athat Foundation for Development and funded by (MEPI). The project’s initial intention is to raise awareness on women’s exercising their rights, using the regulation in favor of victimized women. The specific reason behind this project is to assist elimination of the issue occurrence.