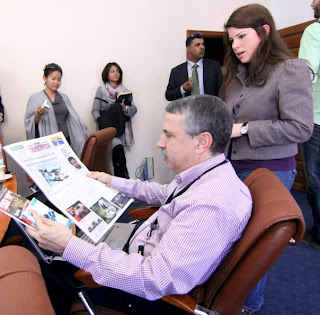 Yemen’s former prime minister, Abdul Karim al-Iryani, got right to the point when I arrived at his Sana home for dinner: “So, Thomas, did it take Abdulmutallab to finally get you here?” Yes, it is true, I admitted, because that young Nigerian, trained in Yemen by Al Qaeda, tried to blow up a Northwest jetliner on Christmas Day, I decided I had to see Yemen firsthand. I further confessed to Iryani: “I was a bit worried coming here. I half expected to be met at the bottom of the stairs from my Qatar Airways flight by Osama bin Laden himself.”

Fortunately, though, I found that Sana is not Kabul, and Yemen is not Afghanistan — not yet. The Walled Old City of Sana, a U.N. World Heritage site with its mud-brick buildings adorned with geometric shapes, was bustling with coffee shops at night and vendors by day. Walking through its streets with a Yemeni friend, we came upon four bearded, elderly Yemeni men — traditional daggers tucked into their belts — discussing a poster taped to a stone wall urging “fathers and mothers” to send their girls to school. When I asked what they thought of that idea, the oldest said he was “ready to give up part of a meal each day so that my girls can learn to read.” Moreover, he added, the poster had just fallen down and he had just taped it back up for others to see. Not what I expected.

Nor did I expect to find civil society organizations here staffed with young American volunteers — and, in the case of The Yemen Observer, an English-language newspaper, a whole newsroom full of them. All I could do was look around at these American college students and wonder: “Do your parents know you’re here?” They just laughed. Every shopkeeper I spoke to in Old Sana spat out the words “Al Qaeda,” which they blamed for killing tourism. Who knew Yemen had tourists? No, this is not Afghanistan.

But this ain’t Denmark, either.

Al Qaeda is like a virus. When it appears en masse, it indicates something is wrong with a country’s immune system. And something is wrong with Yemen’s. A weak central government in Sana rules over a patchwork of rural tribes, using an ad hoc system of patronage, co-optation, corruption and force. Vast areas of the countryside remain outside government control, particularly in the south and east, where 300 to 500 Qaeda fighters have found sanctuary. This “Yemeni Way” has managed to hold the country together and glacially nudge it forward, despite separatist movements in the North and the South. But that old way and pace of doing things can no longer keep pace with the negative trends.

Consider a few numbers: Yemen’s population growth rate is close to 3.5 percent, one of the highest in the world, with 50 percent of Yemen’s 23 million people under the age of 15 and 75 percent under 29. Unemployment is 35 to 40 percent, in part because Saudi Arabia and the other Gulf states booted out a million Yemeni workers after Yemen backed Saddam Hussein in the 1990 gulf war.

Thanks to bad planning and population growth, Yemen could be the first country to run out of water in 10 to 15 years. Already many Yemenis experience interrupted water service, like electricity blackouts, which they also have constantly. In the countryside today, women sometimes walk up to four hours a day to find a working well. The water table has fallen so low in Sana that you need oil-drilling equipment to find it. This isn’t helped by the Yemeni tradition of chewing qat, a mild hallucinogenic leaf drug, the cultivation of which consumes 40 percent of Yemen’s water supply each year.

Roughly 65 percent of Yemeni schoolteachers have only high school degrees. Most people live on less than $2 a day — except those who don’t. A Rolls Royce was recently sold in Sana for the first time. More than 70 percent of government income comes from dwindling oil exports, while 70 percent of Yemenis are illiterate and 15 percent of kids are not in school.

Yet, at the same time, this country has some of the most interesting journalists, social activists and politicians I have met in the Arab world. I spent a morning at the Media Women Forum, an N.G.O. that trains Yemeni female journalists and promotes press freedom — part of the “young guard” of idealistic Yemeni reformers who want to serve their people but, so far, have not really been empowered by the old leadership. Founded by a Yemeni press-freedom sparkplug, Rahma Hugaira, the office was bustling with girls, whose hunger to speak their minds filtered right through the black robes that covered all but their eyes.

It’s not a secret how to fix this country, argued Mohammed al-Asaadi, a media consultant who sat in with us: “We need a revolution against the status quo. We need to build capacity, institutionalize the rule of law and build a culture of ownership and responsibility.” Added Murad Hashim, the Al Jazeera bureau chief here: “We need more education, but we have not used our educated people.” Indeed, Yemen has the resources to save itself, but they need to be mobilized by better governance. Without that, the trend lines will eventually overwhelm everything and the Qaeda virus, still controllable, will spread.