A bloody day in Yemen 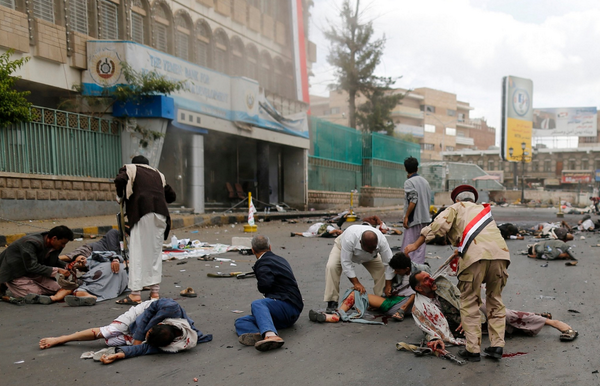 "A bomb blast tore through Tahrir Square in central Sana’a on Thursday morning, killing dozens of supporters of the Houthi movement that controls the Yemeni capital and fuelling fears of more violence between the Shia group and radical Sunni Islamists.

The explosion underlined the mounting political and security vacuum in Sana’a, which came under Houthi control on 21 September shortly before a peace deal was signed between the group and the government.

The health ministry estimated that the attack left at least 47 people dead and 75 wounded, with the death toll likely to rise because a number of survivors are critically injured......" -The Guardian

The explosion moment was captured by a surveillance security camera at a nearby Bank building:

"A suspected al-Qaeda operative detonated a suicide bomb at a military checkpoint on the western outskirts of the city of Mukalla in Hadramout province, killing twenty soldiers, injuring thirteen, and destroying a tank and two army vehicles..." -Atlantic Council

Video of the scene after the attack: