Follow-up: wife murdered by husband after her photo shared on Facebook 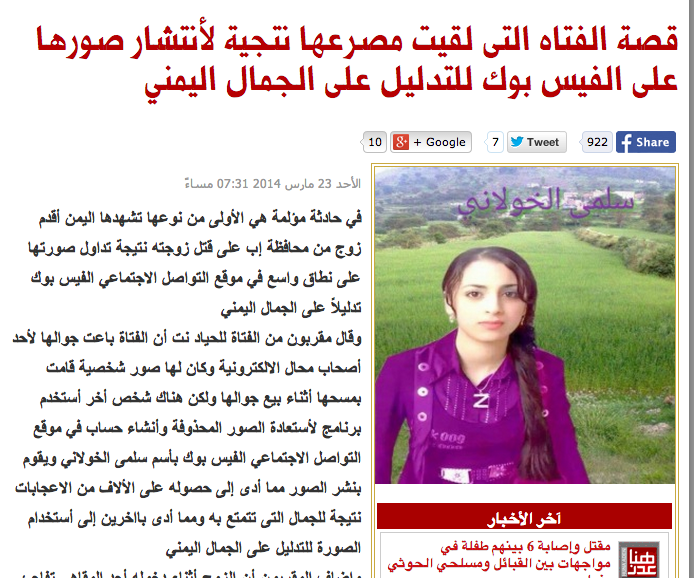 On Sunday the 23rd of March evening, I came across a piece of news about a young lady called, Salwa Al-khawlani through the veteran women's rights activist and former member in the national dialogue conference, Arwa Othman. Othman posted a picture of Al-khowlani with a text, telling about the murder of Al-khawlani by her husband after her picture was shared on Facebook. Othman also enclosed the link to that piece of news.

Then, as I was enraged by a such horrifying incident, I made a blog entry, retelling the story in English and gave my explanation. I posted the blog post on Facebook and Twitter, and the link went viral. More than 20 thousand people read the post around the world over the past week. That's the highest readership I have ever gotten for a one single post. While trying to manage my surprise, I pondered on the story's credibility. Readers' reaction also had some skepticism, even though the majority did not doubt the story.


Essentially, some of the criticism I received was: it's a fake story, and if it was a true story, I should have taken off the picture because I was defaming the murdered girl. My response to such criticism is whether the story was fake or true, I did my research and found out that the news was originally published by Huna Aden – a newly-established online newspaper, and few online forums talked about Al-khawlani too. I contacted Huna Aden, asking further about the story but I received no answer.

I blogged about the story and made sure to mention the phrases, like; “reportedly” and “it's one of the rare stories” in ordered to emphasis that I have a belief that the information given was not necessarily true. The truth of the matter is the story is very plausible within Yemen’s conservative context and that is what drove me to blog it. Despite that, I make no any detraction and I underline that the story was not necessarily true.


In respect of posting Al-khawlani picture, my intention was, as always, to provide a proof about the story. I have blogged about horrific human rights violations and atrocities with graphic images and I see this post no different than the others.


In essence, when we write “reportedly” we make a strong expression that we believe that the story is not necessarily true. As a reader, you have to recognize that. Additionally, this specific story on one hand could be easily understood that it reinforces an orientalist point of view on easterners, and on the other hand it could really contextualize the conservatism grip on the Yemeni society. As an eastern myself, I have no intention to be orientalist on my own society's issues. I'm the product of that conservative society and I know how it can suffocate its women. My objection to the orientalist standpoint is that it very rarely talks about the ladies who are challenging conservatism and breaking through – stories of such ladies are one of the main topics of my blogging since I started in 2010.