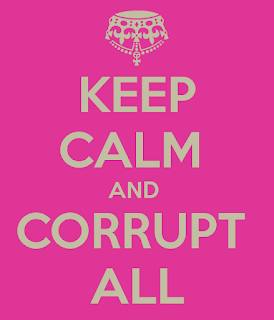 *With the motto 'keep calm and corrupt everything', Yemen's government establishes for the first time ever in its history, and in any other country's history, Ministry of Corruption, last week. The decision didn't come as a surprise since Yemeni Government enjoys a long history in conducting corruption and it is almost regarded as the best in such domain. The Ministry of Corruption aims to be the Government’s lead advisor on the corrupt system, shaping direction for corrupt offices and politicians.

Additionally, it doesn't only aim to work on all matters related to corruption like money laundry, the dominance of bribing, the insufficiency in building essential infrastructure as corrupt leaders skim funds, dirty taxation, stealing estate lands and, of course, the utter lack of accountability, but it also aims to have a national coaching campaign throughout the country to introduce citizens to this fascinating sustainable source of income for one's gains.


The process to establish the ministry was not easy as there was enormous number of applicants. When government announced an open call for Yemeni politicians to apply and fill in the positions, it was very amazing yet not surprising the huge number of applicants. Politicians poured in their requests to join the Ministry of Corruption. The ministry promises to perform very well and ensures that each of its staff gets richer, more influential and more corrupt.

The establishment was made in the wake of Yemen's uprising and the increasing opportunities for corruption in the country's national Treasury which is almost becoming empty. The exploitation on the money aid given for wounded protesters during the uprising and the crazy amount of money given to create Yemen's National Dialogue are couple examples of the many increasing recent opportunities to corrupt. Needless to say, Yemen's government has always mastered corrupting international aid given for the 'war on terror – Alqaeda', in which it was used instead of eradicating terrorist groups it was used to empower army divisions that would eventually perform an efficient crackdown on the people.

Having said that, politicians in Yemen have became stressed because there were increasing matters to corrupt and they were tired running from one ministry to another. Establishing the Ministry of Corruption was much needed and the corruption process had to be more handy. Plus, as the citizens were becoming poorer and the unemployment rate hits the sky, they were delighted to see transparency in Yemen's unity government. Now, finally, citizens can know exactly where to find corrupt politicians.


Citizens won't only enjoy more transparency but they'll also have a free coaching lessons on the “how-to-corrupt” skills. One of the services that the ministry perform is giving coaching lessons to citizens throughout the country on everything related to corruption, since it's Yemen's most sustainable method for an income.


Overall, the citizens were very happy about establishing the ministry's transparency and the fact the they'll receive a skillful training on how to efficiently corrupt. Nevertheless a huge number of Yemeni citizens already do that, especially the ones who have, say, $200 salary per a month and manage to feed a family consisted of 12 members with that, the citizens expressed great deal of content to receive the skillful training.


Ousted president, Ali Abdullah Saleh was the master mind behind the establishment; given the fact that he is the most experienced person not only in the whole country but in the country's eve history. At the moment, out of his 33-years experience, Saleh's giving intensive training to president Hadi on how to give away influential political positions to his relatives, with an absolute disregard to their competency. President Hadi has already planted a number of his relatives in ministries, governmental offices, banks, and so on.


Though, it's not sure if the ministry will exist for a long time. Corrupt politicians seem already stealing the funds allocated for maintaining the ministry.

*This is my first political satire piece, published in The Yemen Times newspaper here. It's intended to be satirist and it's relatively not true. I wrote it after I was inspired by blogger and architecture, Karl Sharro's writings.