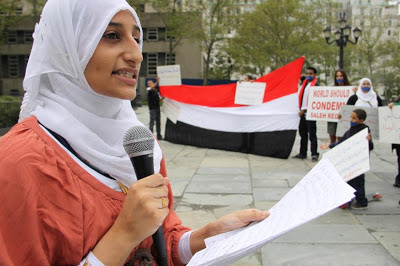 Political activist, Summer Nasser is under serious threats after her car was targeted and unknown groups interrogated and threatened her. She just wrote on her Facebook page:

"I wanted to share with you all a growing concern (that's continuing) at the moment. These passed few days, two cars with armed men have been asking about my being and going to my neighbor's security guard, threatening them with death if they don't give information about myself, i.e when I come, when I leave my home. Their cars (a pick-up truck and a corolla) are without license plates and they come during late nights. My security is being threatened... I am in contact with the Governor of Aden's office and President of the Armed Security forces of Aden about this serious issue. I don't know who these people are or why they are doing this. I wanted to make it public."

Summer was born in the US for Yemeni parents and she is an American citizen.
She is specifically from Aden and resides there presently and has always covered updates in the south. Summer is well-known for her open and public political dissident opinions and, definitely, they're trying to silence her now. If anything harm happened to her, the gov' won't give a damn and guarantee her safety. Summer's case is among thousands of cases in Aden where activists are secretly cleansed by security forces while no one bothers to question that.

In absolute solidarity with my spiritual sister, Summer Nasser.