Dire Humanitarian Situation in Yemen & How Can You Help? 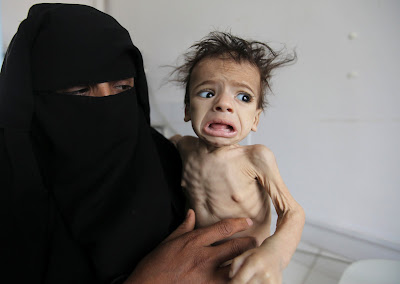 "A woman holds her malnourished child at a therapeutic feeding center at al-Sabyeen hospital in Sanaa June 4, 2012. (Mohamed al-Sayaghi/Reuters)"

The picture above is among a heartbreaking series of footages from Sana'a taken by Reuters about "Hunger in Yemen."

Having said that, I felt compelled to translate big parts of the following interview of BBC Arabic recently done with UNICEF Yemen spokesperson, Mohammed al-Asaadi. The interview reveals a detailed information of hunger among children in Yemen and a worker’s count of her work with Internal Displaced people in Abyan.

I think Yemen is experiencing the worst situation it has ever experienced. I can’t compare things to how they were in the past because things have deteriorated promptly. The matter of fact is, there is %100 increase of people who suffer from food insecurity since 2009 till now. Today, nearly, half of Yemen’s population suffer from the lack of food security and, at least, quarter of the population - 5 million people - suffer essentially from a sever lack of daily food or at least not having a sufficient nutritious meal.

There are also lack of basic health and educational services. There is a general deterioration which doubles the severity of this crisis.

There are some reports stating that Yemen’s current situation is worse than how things were in Somalia during its famine. Is that true?

If we are talking about the development indicators; the indicators say that there is a chronic malnutrition among children of Yemen. There is a high number of stunting and slendering among children below the age of 5 that got higher of how it was in Somalia. Perhaps, Yemen ranks at the second country after Afghanistan when it comes to children’s malnutrition situation. %60 of Yemen’s children suffer from stunting and slendering. Having said that, most Yemenis reflect on that crisis as it’s normal issue, while it’s absolutely not normal or alright. Stunting and slendering has a negative impact on one’s physical and mental structure of which generally affect one’s general performance in the future, including the production and the country’s general progress. Actually, the development indicators we witness in Yemen are quite similar to how they are in Somalia and the African continent.

The host asks:-
What can be done??

Raising this call and the world’s awareness of the situation in Yemen is important. In the same time, it’s very important to work in parallel with developmental work in Yemen so we could avoid any setbacks. The UNICEF has been and still is calling for any cooperation with any sides in carrying on relief work, and in same time we welcome any cooperation in developmental work.

While we were preparing materials for this show, we came across a headline that says, “Famine threatens Yemen and the world is doing nothing”. Is that true?

After the “Friends of Yemen meeting,” we released a statement welcoming their initiative in providing financial aid to Yemen. However, the humanitarian situation in Yemen has been always dreadful, and the crisis of 2011 is what doubled all the problems. There used to be a chronic failure of development in Yemen. The progress witnessed, during that time, at the development indicators of illiteracy, the level of per capita income, and the level of unemployment and etc. All those indicators have never improved during the past years. If you take a look at the Human Development Report for the Arab World, you’d find Yemen at the bottom rank of the list. This was way before the Arab Spring but the 2011 events have doubled all those problems. The issue is that the world would only respond when a catastrophe occurs not before that when there were signs.

Yemen faces a wide range of challenges and scarcity of resources. The main challenge is scarcity of water. It is expected that there would be a huge fight over water in the future. One must take that into consideration.

Ashwaq Kilan who works between Aden and Abyan in distribution of food in Abyan for Internal Displaced people (IDPs) says:-

The situation is extremely awful. It’s really heartbreaking what we witness in that part. The IDPs of Abyan fled their homes due to the gun shooting, sheiling and the destruction by the Ansar al-Sharia group. Before the crisis, the regular citizen in Abyan was depending on agriculture and fishing for his living but after fleeing their homes they no longer have that. They just await the food from the relief NGOs but that is never sufficient. Families of those IDPs would generally have 9 to 10 children. The food we provide is never enough.

This is a very insightful video about Save the Children work in Sana'a for refugee children:-


For those who would like to help NGOs in Yemen, they may contact :-
*The UNICEF, mailto:Sanaa@unicef.org
*Save the Children, twebster@savechildren.org
*Oxfam International Secretariat, Fax: +44 1865 339 101