“Women have to be present in the future of Yemeni politics,” said Horiayah Mashhoor, the newly chosen Yemen Human Rights Minister. “Women led the revolution and played a vital role in making it a success until now.” 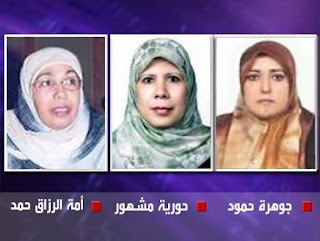 Jawharah Thabet is an active southern official who currently holds the position of deputy secretary general of the socialist party and an official in the Aden local councils. Thabet is now Minister of Cabinet Affairs.

Dr. Amat Urrazak Hamad, a former educator, is the new minister of Civil Services, and previously the Minister of Social Affairs and Labor.

Horiayah Mashoor, the spokesperson of the Opposition National Council and a respected figure within the youth movements, spoke to Avaaz about the work that still lies ahead. “Over the last ten months, the infrastructure of the country was damaged. We have to work on the development sector if we want a stable Yemen.”


Youth Continue to Reject the Initiative, which Keeps Saleh Loyalists in Key Positions

Meanwhile, most of the military and other key positions remain under the control of Ali Saleh’s extended family, including the oil, foreign and defense ministries. Thousands of youth returned to the streets today to reject the GCC Initiative, which officially removed only Ali Saleh from his presidency.

Mohammed Hashem, a youth activist in Sana’a denounced the new cabinet and called it a “cover up” to save Ali Saleh from prosecution. Hashem told Avaaz, “We did not revolt against the oppressor just for a cabinet change. This will continue until justice prevails. Hashem was among the hundreds of thousands of pro democracy protesters who marched today throughout the county calling for the continuation of the Yemen revolution.

“Saleh is still president. His family still controls the army. He has not been prosecuted, and innocent Yemenis continue to die every day. Our revolution is far from over.” According to Sana’a based human rights organization HOOD, at least 36 people were killed by government forces since the GCC power proposal signing two weeks ago.

“The world must understand that Ali Saleh’s ruling party is working on making the next government fail,” Mashoor said. “He will try to cause problems. His goals are not to help the people of Yemen.”