Tell the Truth Because It's Always Revolutionary

Following is an interview I just did with Aswat.com 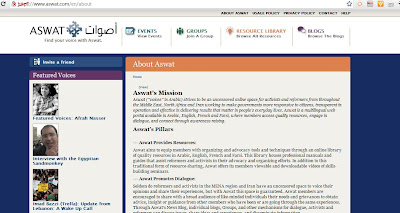 1)Tell us a little about yourself, your blog and the purpose of it?

I’m so many things that it’s hard to know what exactly defines me, lately. In simple, I’m a girl from Yemen who had & still struggles because of my writing and blogging. I started journalism in the end of 2008 right after my graduation from college & I joined Yemen Observer newspaper. I started my blog on Jan. 2010; blogging about social and cultural topics. When Yemen’s uprising began on Jan. 2011, I actively blogged about the protests, giving direct critique against the president & the regime. As an anti-regime protester myself, my blog transformed into a political blog. Since then, I’ve been receiving excessive threats from pro-regime individuals. On May, 2010, I sneaked out of Yemen to participate in a couple events in Europe, then the threats against me where doubled. It was too dangerous for me to go back. Then, I decided to stay in Sweden. Today, I’m sort of a dissident writer in exile.


2) As a woman, how is your input and opinion received by Yemeni readers and other members of the Yemeni blogging community?

The feedback I usually receive from readers is divided between support and attack. On the “soft topics” Yemeni men tend to be supportive, but when it comes to feminist topics I get stormed with harsh comments. Perhaps, that’s a global issue but I really hate the hypocrisy coming from most of Yemeni men.
Plus, politics in Yemen has been narrowed down to Saleh, the president. Whenever I blog about him, I receive hate messages from %70 of the readers; criticizing me on why I blog about a sacred person, like Saleh.


3)To what extent do you believe that the current situation in Yemen is a part of the wave of Arab revolutions that hit Tunisia and Egypt?

Admittedly, the Tunisians have inspired the whole Arab world. Our Arab imaginations were totally unleashed thanks to Tunis. However, I recently have come across news stating that the Arab revolutions started from the Western Sahara, the neglected conflict. The people of this struggling territory have been protesting against the Moroccan colony since Nov. 2010 & the world seems not to listen to them.

The revolutionary atmosphere in Yemen was ripe enough and Yemenis were extremely fed up with Saleh’s regime. In fact, protests in Yemen have already started in a couple of provinces in the southern part of the country a while ago before the Arab spring started in the first place. I think neighboring countries would visibly and collectively join the Arab spring soon. For some time, activists and bloggers around the gulf countries have been pushing the edges; discussing key pressing issues in their countries’ contexts. Bahrain has been part of the Arab spring since early this year. Oman witnessed a few protests. I think there would be a time when all of the other countries would wake up! They have a million reasons to call for change.

Yemen has a very deeply rooted tribal structure and this made me think for a long time that it would be impossible for Yemen to break out of that tribal circle and become a civil state. However, today, after millions have went on streets calling for change , since last January, I’m compelled to believe that Yemen has the potential to have a culture of democracy and work on having democratic governance. I would have never protested myself if I didn’t believe that democracy could flourish afterwards. We called on change and democracy. It’s going to be a very long and exhausting process to reach the point when people can have a free society, pursue their interests, exercise their rights, and take responsibility for their own lives, but change doesn’t happen over one night. It needs time.


6)If President Ali Abdullah Saleh were to step down or removed from power, who will take over? Does an alternative set of political leadership exist in Yemen that could lead with the promise and practice of democratic governance?

That’s the one million dollar question. Who would take over? I confess that the opposition political parties in Yemen are absolutely incompetent of handling anything. They never had any competence. It’s really hard to predict a safe future for Yemeni politics but Yemen currently is at a point of no return. Hence, the uprising must continue no matter what.


7)How will sectarianism affect Yemen and its political stability in the event of President Saleh’s step down or removal?

Sectarianism has existed in Yemen for a long time. Since 2004, Saleh has been fighting a Shi’ite group in the northern part of Yemen. The government claimed that the group was going to overthrow Saleh and implement Shī‘a religious law. Amidst a lack of free independent media coverage, little has been reported about this issue. They only source of information we got was through governmental media sources. Hence, it was hard to know the credibility of the fight and matters related.

At Sa’dah governorate, located in the north, the fight has been taking place led by dissident cleric, Hussein al-Houthi and he is head of the Shia Zaidiyyah sect. Saleh’s regime’s lousy decision was to fight them. Saleh failed in dialogue with dissident political or religious figures. He believed in weapons language only. Thousands were killed and I believe war crimes had taken place and Saleh was never held accountable.

Nevertheless, at the square all sects were coherently protesting calling for change and democracy. It felt good and promising. After 7 months of protesting, I’m really concerned of what the future holds, keeping in mind what Egypt and Tunis is going through with the Islamic influence. I think, why should Yemen be an exception.


8)In your opinion, what role does social media play in the Yemeni demonstrations and other protests in the Middle East?

I can only speak about Yemen. Protests have been happening in Yemen for a couple of years in the southern part of the country where citizens were calling for separation. Those citizens were fed up of social, economic and political discrimination by Saleh's regime. They were calling on separation out of frustration. Their protests were not called "facebook revolutions". It was something greater than that, that made them hit the streets and protest. Little media coverage was given to that because of the Saleh's regime control over press. The regime was master at silencing free media. Frankly, I wish I was living in the southern parts so I could have blogged about what has been happening. Little did I know, Yemen's uprising started, and Sana'a, the capital city where I used to live, was a vocal point of the uprising. Hence, I blogged about that.

It's totally true that Yemen's internet penetration is %2 or %3 ,, but it's the duty of this minority to convey the message of what's on the ground.


9)If Saleh stays or goes, what do you plan to do once you return to Yemen?

Go directly to the change square and kiss its ground.


10)What advice would you give other bloggers and online activists in the region who face censorship and threats for writing about political and social reform in their respective countries?

I’d advise them to keep on being an activist and writing against injustice and corruption but never let them silence you. A smart activist and dissident writer is one who never gives a chance for authorities to silence them. By silence I don’t only mean censorship and arrestment, but I also mean eliminating you. I advise activists and writers to tell the truth because it's always revolutionary.

*Aswat (“voices” in Arabic) strives to be an uncensored online space for activists and reformers from throughout the Middle East, North Africa and Iran working to make governments more responsive to citizens, transparent in operation and effective in delivering results that matter in people’s everyday lives.