In a multi-part series, National Yemen examines the ways in which international news describes Yemen and its current challenges. Appealing to readers generally unfamiliar with the country, analysis of Yemen is more often then not accompanied with a repetitive series of labels (“Yemen is the poorest country in the Arab World, “Yemen is the ancestral home of Osama Bin Laden, “Yemen is largely ungoverned”) that provide a hasty and often inaccurate snapshot.

Here, these claims are dissected and the news and political agendas that lie beneath them are explored. 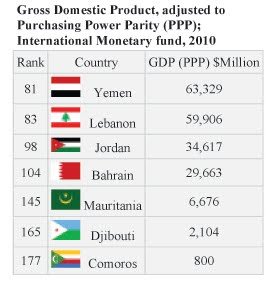 This remains the most persistent – and most obviously inaccurate – description attributed to Yemen. Just in the last two weeks, the New York Times, the Reuters, and CBS news have indulged in this falsehood.

Few can doubt the serious and manifold developmental problems that face Yemen, or ignore its obvious, grinding poverty. So it is important to acknowledge that Yemen is in fact one of the most poverty-stricken, corrupt, and developmentally-challenged countries not only among the Arab countries, but in the whole world.

Not just poverty, but unequal distribution of wealth, poor governance, and lack of foreign investment are the hallmarks of the countries depressed economic landscape.

Still, as matter of pure fact – according to most reliable definitions of what constitutes the “Arab World,” and an array of metrics used to assess poverty – Yemen is not the poorest country in the Arab World.

The labels “poor” or “poorest” are powerful, and powerfully negative. The discussion of their use here is not meant to engage in the kind of unconstructive and border-line cruel name-calling that the international media engages in.

Rather, it is meant to show that calling Yemen the poorest Arab country is not only inaccurate and hence unprofessional and irresponsible. But also, it shows that journalism’s employment of the phrase lazily equates the coverage of terrorism and political crisis, which are the inevitable subject of their reportage, with some fantastical notion of the country’s supposedly unique impoverishment.

The Arab World consists of vast array of peoples and countries with historical, linguistic, and ethnic ties. Its membership could be considered a subject of some debate, but surely members of the international media cannot be the arbiters of who is Arab and who is not – especially if these choices serve to rationalize politicized news agendas or vindicate tired clichés.

The Arab League, the most formal, established, and mutually-recognizing institution by which the “Arab World” interacts, must serve as the most reliable list of Arab states. And unfortunately for those in the foreign press who would try to caricaturize Yemen, the League of 22 countries spans from Mauretania in the West, to Comoros in the South, and Sudan, Djibouti, and Somalia at its center.

Clearly, none of these countries are economic powerhouses, all suffer from acute and seemingly irremediable poverty, and all have varying degrees of social and political strife that the international media occasionally deigns to cover.

Still, all of these countries, in most measures of what constitutes “poverty,” are in a far more grave and undeveloped situation than Yemen.

The most comprehensive measurement of development, or the lack thereof, is the United Nation’s annual Human Development Index, which transcends measurements of gross domestic product, whether per capita or nominal, to incorporate a range of relevant factors such as literacy, gender equality, child mortality, and others.

In all these regards, Yemen, while hardly a paragon of these values, and dangerously near the bottom of the global list, still placed tidily ahead of the less fortunate Arab countries named above.

The Christian Science Monitor recently expanded quite extravagantly upon the standard formula by attributing to Yemen “the Arab World’s poorest economy.” Again, this is completely misleading and false.

In terms of nominal gross domestic product, Yemen’s economy outstrips Jordan and even oil-laden Bahrain. Without a doubt, Yemen’s massive population compared to these sparsely-inhabited countries makes it so that its citizens receive a drastically smaller piece of national wealth, but the fact of its more lucrative economy stands.

Not only this, but rankings of states based on GDP adjusted to the costs of basic goods and services in each country, or “purchasing power parity,” quite surprisingly find that Yemen places ahead of more nominally wealthy Arab countries such as Lebanon, Jordan, and Bahrain.

This indicates that Yemenis’ depressed incomes are more suited to purchasing certain basic necessities than citizens of these other Arab states.

In the same vein, measurements of unequal distribution of wealth puts Yemen above other, traditionally less scrutinized Arab states, such as Morocco, Jordan, and – very notably – Tunisia.

Recent scholarship in political science strongly suggests that economic dispossession and social inequality are possible forerunners of civil strife – the darling topic of news on Yemen. Perhaps the subtleties of these phenomena in Yemen, and in these other countries, deserve more frank and honest investigation by the media.

It is also interesting to note that besieged Gaza, the occupied West Bank, and Western Sahara, all of which are under massive military pressure, are also, not coincidentally, desperately poor.

While the global and regional order has prevented the people of these territories from realizing the nationhood they seek, their people are widely-acknowledged as Arabs, and their economic dispossession also deserves some recognition by international news outlets.

Gaza, for one, has 80% of its people living under the poverty line, compared to Yemen’s 45%. Still, the problems of Yemen and Gaza vary dramatically, and cannot simply be attributed to their comparable levels of poverty.

Context, and especially accuracy, in reporting would do better to ascertain the problems of all these places.

Curt and patently inaccurate slurs should not be the stuff of news, and do little to broaden understanding and discover solutions – which, after all, are the most sacred responsibilities of journalism.