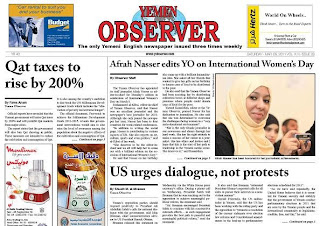 The Yemen Observer has appointed its staff journalist Afrah Nasser as editor-in-chief for Monday’s edition in celebration of International Women’s Day on March 8.

Mohammed al-Kibsi, editor-in-chief of Yemen Observer, said that Nasser was an excellent journalist and the newspaper’s best journalist for 2010. Although she only joined the newspaper last year, Nasser has been to four countries for work-related conferences. “In addition to writing the social page, Nasser is contributing in various aspects of life. She also reports on art, culture, sports and even politics,” said al-Kibsi of her work.

“She deserves to be the editor-in-chief and we all will help her to come out with a brilliant edition on the occasion of International Women’s Day.” He said that Nasser on her birthday also came up with a brilliant humanitarian idea. She asked all her friends that wanted to give her gifts on her birthday to donate cans of food to be distributed to the poor.

He also said that the Yemen Observer had been assisting her by distributing collection boxes at different shops and premises where people could donate cans of food for the poor. Yazeed Kamaldien, editor at the Yemen Observer, praised Nasser for her dedication to journalism. He also said that she was determined to overcome the challenges facing women in a “very male-dominated environment”. “She is the only female journalist in our newsroom and shines through her hard work. She has the right attitude to make a success of her career as a journalist. She has ethics and justice and I hope that this is the start of her path to leadership in the Yemeni media scene.

She deserves it,” said Kamaldien. “I also hope that Yemen’s women are appreciated on International Women’s Day. They seem to face many cultural and societal challenges. Everybody needs to play a role to ensure that women are not oppressed or face discrimination. The Yemen Observer is showing the right kind of leadership by affording women access to opportunities and growth.” Zaid al-Alaya’a, editor-in-chief of Yemen Today magazine, has worked with Nasser and said that she “takes pride in everything she does”. “She does her work with passion and style. She has that rare endless hunger for knowledge.

The best thing in her character is that she never compromises when it comes to the quality of her work,” he said.


Nasser was among 23 media figures honored by the Yemeni Women Media Forum (YMWF) on Thursday. They were recognized as pioneers and supporters for women’s issues. The forum aims to shed light on the importance of Yemeni women’s media work. Hasan al-Lawzi, the Minister of Information, handed certifications to the pioneers. He said that Yemeni women achieved progress in “several fields and sectors and also obtained high level posts around the country in the government”. He also thanked Rahmah Hugaira, the YMWF’s chairwomen, for her effort and support for Yemeni women in media. Intsar Omer, general Manger of the department of Women and Children at the Ministry of Information, said that women around Yemen have been flourishing in the media field since the country’s unification. However, there was still a lot of work to be done. “Unification has definitely helped women in Yemen to obtain several positions but they still have many challenges ahead of them.

Twenty-seven newspapers and magazines had female chief editors but these are publications that are owned mainly by those female editors. This indicates the hardship that women face to have those kinds of posts from other sources,” said Omer. Amal al-Basha, chairperson of the Sisters Arab Forum for Human Rights, expressed condemnation at the continuous violation of women’s rights in Yemen. “Before talking about women’s achievements in media it’s very important to stress on how there has been ongoing violations of women’s rights around Yemen, with no one to investigate this,” said al-Basha. 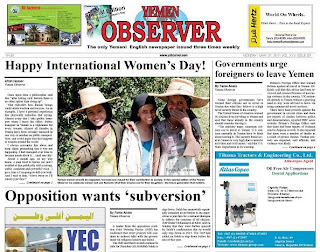 Happy International Women’s day every one!


Once upon time, a philosopher said that, “After hitting the bottom rock, there is no other option than rising above.” That embodies how human beings nature could reach wisdom and success. As an example, I have a personal experience to physically embody that saying.


Almost every day I take the public transportation when I leave my office. Public transportation in Yemen is a nightmare for every female. Almost all of females in Yemen have been sexually harassed in one way or another at those transportations. It’s an international issue happening to women around the world. Being a female myself, I always encounter this abuse and keep silent; pretending that it was not happening. I managed, with the passage of time to get numb about it, until one day!

One month ago, on my way home, one man tried to harass me and I scolded him publically with a strong, stable, confident and powerful voice. I gave him “am-going-to-kill-you look”! And I said to him, “Move away or I’ll smash your face!” All of this happened in few seconds. People intervened and he moved away. This was the first time; I spoke up and not kept silent anymore. I’ve never done that and I’ve never thought that I would be that strong and confident. Later on, I realized that my source of confidence and the strength to rise up was based on my education.


For two years, journalism has been my gateway to education. I’m daily educating myself about my country, my people and the world’s issues. It has been for me my daily source of knowledge. Today, I’m remarking the International Women’s Day (IWD); 100th anniversary as being the editor in chief of Yemen Observer that’s a step that has never been done before by the newspaper. This really tells me that good journalism could really make a difference; that’s in making a young female journalist’s dream come true. It also tells me how media in Yemen could really embrace females who also seek excellence in their work.


School enrolment of girls in Yemen remains lower than in other countries in the region, according to UNICEF. However, gains in girls’ enrolment were even higher with an increase to 78% in 2008-09 from 49% in 1998-99, reducing by half the gap with male enrolment, according to the International Bank for Reconstruction and Development. I take this chance to tell the world that Yemen is on the horizon with very powerful women. As an example of that is the fact that today I present to all of you a special issue of Yemen Observer with the theme of celebrating IWD.

Since motherhood is very precious, gap in health workers is a must-addressed issue. Hence, in this issue Save the Children is calling for greater investment in female health workers as essential for saving mothers’ and children’s lives.

Most importantly, to link the occasion with what’s happening on Yemen’s ground, Yemen Observer presents a special report on women’s participation during the protests; from both sides to have the full picture.

Finally, to add a fun flavor, readers are welcome to submit their comments to cartoons sketches made by illustrator, Maha al-Omari and Hasan al-Arasi, portraying different situations for Yemeni ladies. The sketches are funny and profound at the same time.

Last but not least, I’d like to express my gratitude to my mother, sister my friends who have always believed in me and I’d like to express my ultimate appreciation and adoration to all the people who helped me to have this special event in my life. Thank you to Mr. Faris al-Sananbani, Mr. Mohammed al-Kibsi, Mr. Zaid al-Alaya'a, Mr. Yazeed Kamal al-Din and everyone in Yemen Observer who has always been supporting me.

To conclude, I find this beautiful quote to say exactly what a woman is really look like; “A woman is like a tea bag. You never know how strong she is until she gets into hot water. - Eleanor Roosevelt.

Happy International Women’s day every one!