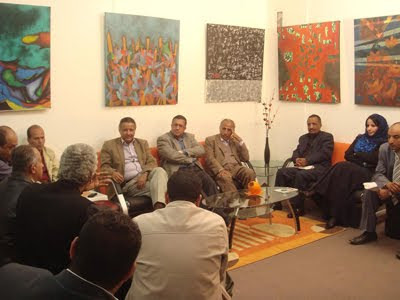 Art was the common thread linking everyone at the gathering “In Yemen, it’s very important to produce Art in a time when most of the people think that it’s not essential for their existence,” one participant spoke during the gathering. Typically, that might sound strange to hear from a Yemeni, living in Yemen, a country that has many problems to solve; like poverty, illiteracy, corruption, unemployment and terrorism. However, the gathering’s main outcome was that art goes hand in hand with Yemen’s overall development and Yemen’s art should never be overlooked.

During the monthly gathering held by one of Yemen’s most remarkable contemporary artists and painters, Amna al-Nusiri, heated discussions and conversations raomed around the hall, revealing art’s existence among Yemeni people and its importance in Yemen. The gathering embodied how Yemen looked behind the news which portrayed it as a terrorist and conservative country. However, it’s interesting to find an art movement while the country still has many key issues to be addressed.

“Joy and art are essential for human beings’ survival. Plus, they all are well-contacted to life and true living. As long as people are alive, art will always be there and people will produce it. Yemenis are a living proof of that. From my personal experience, I’ve seen Yemeni art work participation in Arab countries’ art events more than the other countries’ participations,” said Abdel-Aziz Omar, Yemeni writer and researcher. 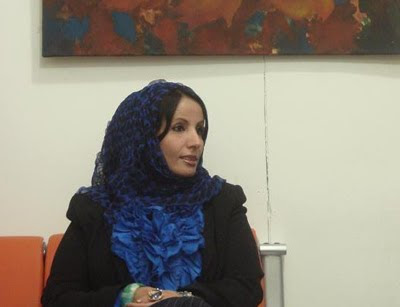 Al-Nusisr strongly believes that art is vital for people’s souls. “This issue crosses with the overall understanding and comprehension of art in Yemen. It’s a common illusion and culture that art is secondary among most of the Yemenis in Yemen. Nonetheless, I’d like to say that art is essential for polishing people’s spirits. It’s neither religion nor something else that could have the same effect that art has on people’s hearts and souls. It’s art. As long as people regard art as if it is not important, no growth will occur inside them,” pointed out al-Nusisri.

She added that rescuing Yemen from going down won’t happen politically. It will happen artistically. “Yemen doesn’t need religious groups to intervene and rescue it, it needs all forms of art so people could regard that as their shelter. Why do most of the people in Yemen turn to Qat, drugs, and terrorist groups, simply because they are living without something else that will fulfill their lives,” Amana said.

The monthly gathering held at al-Nusiri’s atelier gathers every month a collection of Yemen’s most remarkable and embarking artists, academics, intellectuals and journalists. The gathering aims each month to tackle on cutting issue of Yemen’s art scene. They all put the issue onto the discussion table and analyze it and bring some light onto it. “There are many young artists who are trying to have their own space in art scene in Yemen but I blame media for not bringing them to the light,” al-Nusiri concluded.