Yemeni clothing and adornment’s culture a work in progress 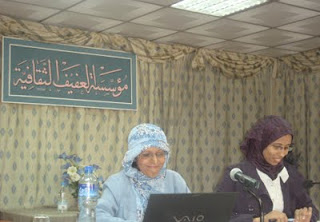 Al-Afif Cultural Foundation held a seminar on “clothing and adornment among female teenagers; their rights to express themselves through clothing”, last week. Dr. Raufa Hassan, chairperson of The Cultural Development Planning Foundation (CDPF) ran the seminar, presenting her study on the subject matter.

“Throughout history, people dressed to be warm, to be beautiful to meet natural needs. Eventually, clothing and adornment turned out to be a sign of people’s living standards. Time developed clothing into an industry which is shown by the trends and big luxury names cloths could have. Even through religions, cloths had an importance and certain rules,” said Dr. Hassan.

The seminar focused on a specific age category that was from age 12 to 20 who would most probably not be married. That category consisted of single girls. Dr. Hassan exhibited facts about the nature of girls interaction with cloths and adornment in some of Yemen’s cities.

“In Jof governorate in Yemen, according to studies, teenager girls who are not still wed, are not allowed to show their faces to anybody even their families so they wear veils and live, eat and sleep in their homes without removing that veil from their faces . There are other Yemeni places where girls cant show their hair as long as they are singles.,” said Dr. Hassan.

The seminar had a discussion from the attendees, giving many chances to have their say. However, Dr. Hassan concluded by stating the clothing and adornment’s culture is a relative matter and it’s a work in progress.