I can switch on my car by calling it with my mobile, al-Daba’a 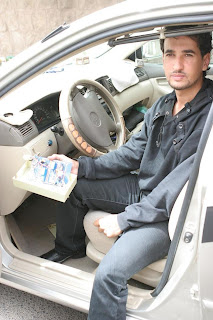 One of the winners of President Ali Abdullah Saleh’s awards for youth competition, in the field of Practical Sciences, 2003, Taqi Hassan Mohammed al-Daba’a represents a promising scientific future for Yemen. The 27 years old young technician, working in a communication company was awarded the president award for his invention of switching on cars with a simple device he invented from anywhere in the country but with certain specializations. Years passed and al-Daba’a’s invention got relatively developed with his personal efforts. Now, he reached an advanced step in which he came to Yemen Observer and realized his invention by showing how he could switch on his car by dialing a certain number by his mobile and his car got switched on. To have a look at how this young man was interested in science and what’s his thought on scientific inventions especially from Yemenis, Yemen Observer made this interview with him.

Yemen Observer (YO): How did your fascination with science and invention begin?
Taqi al-Daba’a (TA): Since I was a teenager I was very much interested in electronic and electrical specialization, modern science and high technology. My first scientific innovative endeavor was when I was enrolled at the institution of Ministry of Technical education, taking my diploma of electric. I invented an electronic key, working with a sensor by hands. I used laser and respondent signs to create warning sounds.

YO: What does differ your two inventions related to switching cars?
TA: The previous was still in its initial phase of switching on only with its devise but today I invented a certain code that one could call to via mobiles and switch on the car.

YO: How do you get inspired? And how did the idea of switching cars on from mobiles evolve in the first place?
TA: I don’t chew qat and I always read magazines on science and technology and from that I get really inspired. However, the idea about switching cars on came as a result of a challenge between my brother and I. it was a theory I brought up to him and some friends and my brother dared me to do it. I was very determined to make it and prove that I could make it. I took tools and metals from different irrelevant places and combined them to produce my device. You can say that I invented the device from scratch.

YO: What’s the unique feature of your device?
TA: It could switch on any machine, like mixture or washing machine but one could control what exactly it switches on with certain kind of frequencies the device uses and that’s by dialing certain numbers by mobile. It will be easier to switch on electronic gates or smaller machines. It will be a great investment if we use it for gates with special codes.

YO: How could describe your invention?
TA: I would like people to know that this invention could be used for several reasons. Serving people’s needs that would definitely ease up people’s lives a little bit. It’s a simple local device that’s not going to cost people a lot if they want to buy it. It’s for public’s service, luxury and comfort.

YO: For your invention, what do you wish for?
TA: I wish there was support and encouragement for young Yemeni scientists who aspire digging into science and making up devices and methods that could ease people’s lives. Plus, I wish we realize my invention into reality. It will be a national product.

YO: What are your plans?
TA: I plan to offer a new project that will help in self-generating electricity with no expenses. I believe that will have a global benefit but the project still lacks many experiments. Plus, it has many shortages but if I’m guaranteed and provided the needed support, time, finance and a scientific team, I could carry on without any limitation.

I want the public to know that this is a very good chance where Yemen will contribute to the international invention movement. Yemen could provide the whole world a chance where everyone could benefit from. I would like people and myself to benefit from this. I would love to widen the idea into a huge project. Many people could gain a lot and of course that will happen in cooperation with communication companies.

YO: Honestly, are you looking for fame?
TA: Not at all. Believe it or not! Six years ago, I invented the machine and since that day, I never gained any kind of benefit. Yes I got an award but that vanished quickly. I was looking for a chance where I could develop my scientific knowledge. I needed a chance to study abroad and enhance my knowledge and interest. I wanted to have place, time and finance to widen my knowledge in the field of science.

YO: What’s your great ambition?
TA: I very much hope we could have in Yemen a Scientific Research Center where researches on scientific subjects are worked on and developed. I wish we could have support from the president himself and finance from business men as well. The center’s findings will give benefit to companies and factories in Yemen in general. I desperately want young Yemenis researchers to be given chances. I know many youth who are very much interested in science and inventions. However, researching needs many factors like a space, time, books, tools, finance and so on. Experiments are not fully guaranteed to be successful. They could fail or succeed. An ordinary researcher can’t take all the risks alone if his experiment didn’t succeed but if he was working with a center he wouldn’t take all the risks by himself and he would keep on researching no matter what.

YO: What could you say to anyone who have doubts about what you’re saying?
TA: Long time ago, we never thought of today’s machines and devices to exist in reality. We thought they were impossible to have them in reality but things changed and today we use those technology tools normally. What I’m talking about is perhaps impossible in the time being but I hope that one day we could generate electricity with little or zero expense. All I need is an unconditional support because experiments could fail or succeed and that always holds me back.

*Taqi al-Daba’a is a holder of Bachelor’s Degree of English Department, Faculty of Arts & Humanities, Sana’a University, 2009. He obtained a diploma of electric (industrial control, twisting engine) from Ministry of Technical education.