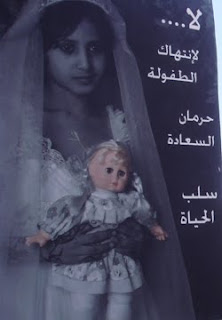 After last month’s demonstrations for and against a law that would establish a minimum marriage age for both males and females, the Yemeni social and religious landscape has again been disturbed by tragic news related to child brides. Couple weeks ago, a Yemeni child bride, who was only 13, died fives days after her wedding due to severe hemorrhaging and the rupturing of internal organs as a result of sexual intercourse. The story has made the headlines in Yemeni and international media.

The National Safe Motherhood Alliance, in cooperation with the British Department for International Development (DFID) and the White Ribbon Alliance, conducted a two-day seminar last week on different approaches to the issues and legislation related to child marriage. The seminar tackled the issue from religious, legal and medical points of view. It affirmed direct notions on several levels. One is that there are great religious reservations on the legalization of child marriage. Second is that the legislation is a work in progress. The third and most important conclusion of the seminar was that child marriage is medically dangerous for the brides because it jeopardizes their lives, often leading to their deaths.

The participants unanimously agreed that child marriage is like statutory rape when the bride is less than 13 years old, and it should be considered as such from religious, legal or medical perspectives. The seminar was run by Dr. Najeeb Ghanem, MP of the Islah party in Yemen’s parliament and Chairman of the Committee on Public Health and Population, Dr. Abdelmo’men Shuja’a al-Dean, professor of Sharia and Law at Sana’a University, and Mohammed al-Showiter, teacher and researcher in Islamic jurisprudence. Each one provided the Alliance’s attending members with information related to child marriage’s issues and how it conveys many risks to child-brides and their newborns. They presented points based on each one’s knowledge background. 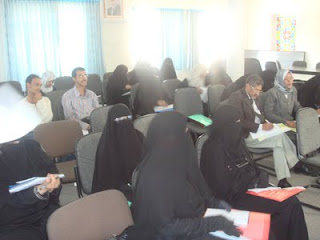 “The problem of child marriage is mainly predominant in rural areas because of many reasons. The traditional and social beliefs are the main factors. Fundamentally, its consequences are embodied in the maternal mortality rate for child brides and their newborn babies, which is simply considered to be a waste of the country’s human resource,” said Dr. Ghanem. In addition, many child brides face severe consequences after they become pregnant. They face a process that’s greatly painful for older women, let alone to child wives.

Dr. Ghanem expressed his sadness for the fatal impact on young mothers and their babies because of this issue. “Child mothers face dangerous risks to their health, leading them to death. Physically and emotionally neither the mothers nor the newborns are ready for such a step into life. To have a baby at such an early age is like a child fostering another child, therefore neither the mother nor her child gets a chance to live her childhood or have a proper fostering,” said Dr.Ghanem.

A matter of true religious understanding

The issue’s roots lie in people’s traditions and awareness, which according to Mohammed al-Showiter had to be treated into the public’s mentality before it was delivered to the parliament. “I think we should have enhanced the public’s awareness before asking for the law’s amendments,” said al-Showiter. Nevertheless, al-Showiter thinks that a true understanding of Islam would demolish all current fatal issues for child mothers.

“Complete real motives behind marriage are lost in child marriage and the simple question is, are child mothers capable of handling marriage’s responsibilities?,” al-Showiter wondered.


A call for a more compassionate constitution

“Health care is in our constitution and setting a child marriage age law is under that. The law has to be enforced and it includes details of its consequences. However, setting a minimum age for marriage doesn’t only have to do with age, but also with competence,” said Dr. Shuja’a al-Dean.

The seminar aimed at providing crucial and in-depth knowledge about child marriage to the Alliance’s members, equipping them with informative information on the subject-matter. The Alliance plans to do other awareness-raising seminars on the same topic for the public in the coming weeks.