For Ayyad Algabyali, the struggle against President Donald Trump’s travel ban is personal.

The advocacy director with the Yemeni-American Merchants Association helps members of his community affected by the ban gain entry to the US. A naturalised American, Mr Algabyali, 22, came to New York City from Yemen at the age of eight to join his father, a US citizen who arrived in the country in the mid-1980s.

But his mother, who holds a Yemeni passport, has been stranded in Egypt for the past year and a half after going there to apply for an American visa – the US embassy in Yemen has been shut since 2014.

“Among the many applications I am working on at the moment is my own mother’s application,” said Mr Algabyali, who received his bachelor's degree at the end of May. “It pains me that she missed my graduation ceremony in New York because of the ban.”

Like many Yemeni-Americans, Mr Algabyali’s family has kept one foot in Yemen and one foot in the US, travelling back and forth over the years.

His mother had never left Yemen until – seeking to escape the war – she went to Egypt for her visa.

“For my mother, it was extremely important that my siblings and I were raised in Yemen so we would be close to our heritage and traditions,” Mr Algabyali said. “So she never had the need to apply for US citizenship ... before the war.”

Her visa application has been rejected despite her qualifying for a waiver from the travel ban – but she continues to apply.

The waivers are granted at the US consul’s discretion, based on whether the applicant’s entry to the US is in the national interest, does not pose a security threat and denying it would cause undue hardship.

The travel ban applies to five other Muslim-majority countries besides Yemen – Iran, Libya, Somalia, Syria and Chad – as well as North Korea and Venezuela. But it has had the biggest effect on Yemenis, says Iman Boukadoum, senior staff lawyer at the American-Arab Anti-Discrimination Committee.

“The ban on Yemenis has meant an absolute devastation of a population that’s already suffering the world’s largest humanitarian crisis,” she said.

Ms Boukadoum has been handling dozens of cases where Yemeni Americans are trying to reunite with loved ones, obtain urgent medical care or even see a dying relative.

“What’s complicated about the travel ban is that it doesn’t only affect Yemeni Americans and Yemenis who live in the US, but also people who live outside the US.

There are tens of thousands of Yemenis stuck in Djibouti, Malaysia, Egypt and other places who are denied entry while having legitimate reasons to come to the US.”

Yemenis have a long history in the US, with the first immigrants arriving in the 1860s.

Precise figures are scarce, but Americans of Yemeni origin are believed to number about 70,000, about 2 per cent of the 3.6 million Arab American population.


Despite their relatively small numbers and no previous history of political organisation, the Yemeni American community has played a significant role in opposing the travel ban and anti-Muslim hate speech.

This is particularly the case in New York City, where Yemeni Americans are the largest group among citizens with origins in countries affected by the travel ban.

“Within just a few days of the ban coming into effect on February 2, 2017, we managed to organise a strike and rally in New York, where about 1,000 Yemeni-American-owned shops and delis shut down for a day in protest against the travel ban,” said Debbie Almontaser, a founding member of Yama.

About half of the estimated 10,000 small convenience shops in New York, known locally as bodegas, are owned by Yemeni-Americans.

Despite their long history in the country, Yemeni-American business owners did not have an official group until the travel ban, which triggered the formation of Yama.

Ms Almontaser attributes the current mobilisation of the community to two factors: the war in Yemen, which has raged since 2015 and raised fears among many that they might never be able to visit Yemen again; and the travel ban, the biggest political challenge they have faced.

“There used to be a Yemeni-American association for the last 40 years that didn’t do anything substantial and eventually faded away,” Ms Almontaser said.

“But the war in Yemen and the travel ban posed a wake-up call for many.”

Most Yemenis living in the US were not much interested in forming organisations to represent them.

For many, the objective was to stay in the US for a few years, work hard, live frugally and ultimately return to Yemen with their savings.

“Basically, so many Yemeni Americans never saw themselves as US citizens even if they were already American citizens,” Ms Almontaser said.

“Although the strike didn’t end the travel ban, it made the Yemeni-American community realise their agency in this country and the influential political role they could play. We had to be more organised and established Yama immediately.”

Yama's campaign for Yemeni Americans’ rights has received great recognition and support from other organisations and politicians.

In April 2019, Yama launched its second biggest civic action: an indefinite boycott of the New York Post following the newspaper’s attack on Somali-born congresswoman Ilhan Omar. The Yemeni-owned bodegas refused to sell the Post in their shops after the newspaper published a front page that showed a picture of World Trade Centre towers on fire with a quote from the Muslim congresswoman. 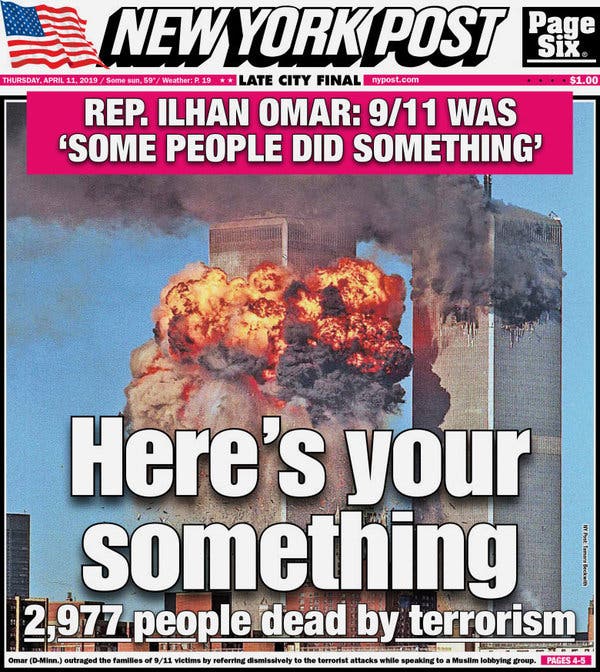 Ms Omar was one of the keynote speakers at Yama’s first annual gala dinner in February. Revealing that her mother was originally from Yemen, she praised the Yemeni-American community and the political mobilisation led by Yama.

“The work that was getting done in New York was going to be one that transformed the conversation,” Ms Omar said. “Because when people saw 5,000 Yemeni merchants and their neighbours rising up, they knew that Muslims here in the United States were not playing; that we were no longer going to sit on the sidelines. That we weren’t afraid and that we recognised our power.”

Ms Omar has been one of the foremost voices calling to repeal the ban. In April, she declares support for the National Origin-Based Anti-discrimination for Non-immigrants Act, also known as the No Ban Act, introduced by Democratic senator Chris Coons and representative Judy Chu. The bill aims to end to the Muslim travel ban and change the standard by which presidents can invoke such a ban in the future.

Among the 400 organisations supporting the proposed law is the Yemeni Alliance Committee, a an NGO in San Francisco. “The No Ban Act to date seems like most promising bill, especially as 2020 is coming around," said founding member Jehan Hakim said, hoping that the presidential candidates make repealing the ban an immigration policy priority.

Rowaida Abdelaziz, an Arab-American reporter on Muslim civil rights at the Huffington Post, said it remained to be seen whether the bill will pass, but it is very difficult to argue the travel ban has served the US national security interest.

“The travel ban isn’t keeping the US any safer. Rather, it made our national security even worse,” she told The National, noting that the ban has thrown many American families into chaos.

“I know this young Yemeni-American mother who just had a baby and was unable to reunite with her husband – a Yemeni national – so she decided to take her baby and move to Yemen because she couldn’t take the distance and raising a child on her own,” Ms Abdelaziz said.


“So this is an American citizen, born and raised here and not feeling fully protected in her own country. She was forced to make that decision, which essentially meant that she has now put her life and her baby's life in danger.”