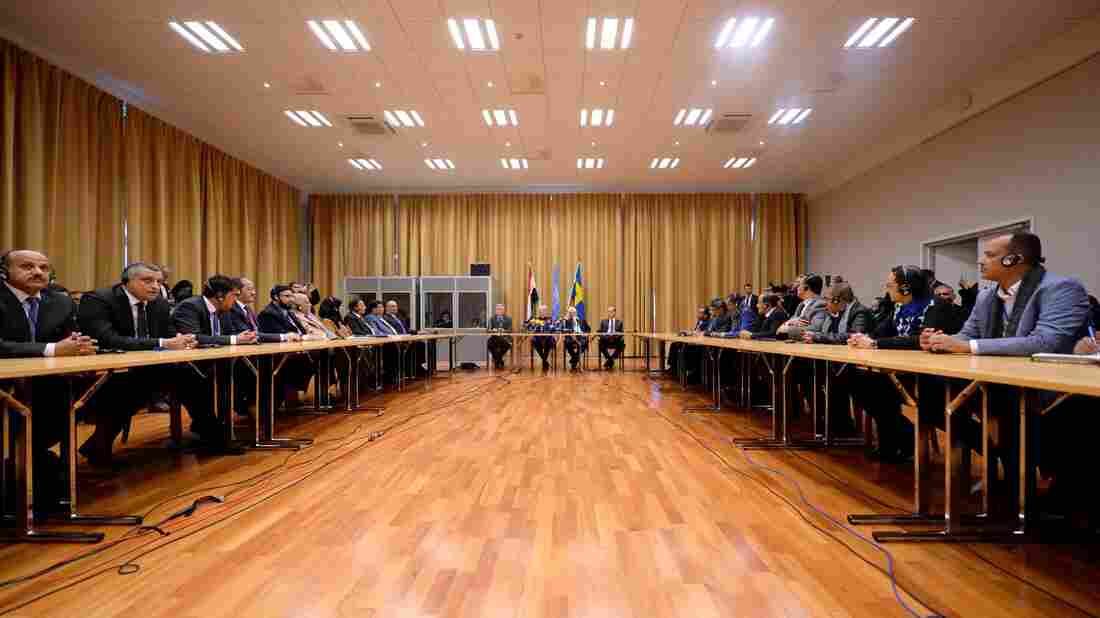 *Rimbo, Sweden - It is still too early to believe that peace in Yemen is in sight, but at the same time, one can’t say that there is no end in sight.

Covering the Yemen peace talks in Sweden from Rimbo since they started last week has not been easy. The discussions are closed-door sessions with the press working under several restrictions. Updates on the talks consistently change, and the freezing weather and dark days have made it a challenging mission to uncover the truth. The full agenda not been shared, but humanitarian issues have been the main focus so far.


A major prisoner swap deal presented a breakthrough, but without a ceasefire in place—and deep divisions between the two parties on a political framework that everyone can agree on—there are still enormous hurdles in bringing peace to Yemen.

Though proposals for a political framework have not been discussed yet, the warring sides have shown a gulf of difference over the UNSC 2216 resolution of 2015 that called for the disarmament of the Houthis and the restoration of Abd Rabbu Mansour Hadi’s presidential legitimacy.


The prospects for peace, though, are promising – but only on one condition: if pressure from both the international community, especially the US, continues, and the warring parties show a deep interest in reaching a political solution.


Externally, these peace talks come after the global outcry over the killing of the Saudi journalist, Jamal Khashoggi, and the global reassessment of Saudi Arabia’s devastating war in Yemen, and serious calls by senior US officials to end the war.

Outside of bringing the warring parties to meet face to face for the first time in two years—an achievement in and of itself—the UN special envoy to Yemen, Martin Griffiths has succeeded in addressing the shortcomings in preparation, and conduct, of previous talks.


Griffiths established two independent consultative groups (on political and civil affairs) consisting of some of Yemen’s leading women and men politicians who have, and still will, contribute to executing the talks.


Four years on, the war in Yemen has drastically changed both the political and military power of warring parties. The murder of former Yemeni president, Ali Abdullah Saleh has strengthened the Houthis’ political and military power. But the battle in Houdeidah could alter the balance of power and present a military advantage to one side. The battle isn’t over yet, and all possibilities remain on the table.


Nonetheless, there seems to be a firmer willingness to reach an agreement than in previous talks, as the Yemeni government realises that the international pressure on its backer, Saudi Arabia, is growing.

The Houthis also appear to recognise that Saudia Arabia needs to save some face in the aftermath of Saudi Arabia's global diplomatic isolation after the Khashoggi killing. They can use this to their advantage to extract compromises. Some observers believe that among the captives are dozens of Saudi captiveswhich the country is determined to get back.

One of the main, if not the key, problems, is who has final decision-making power in the talks.

Some might conclude that this process is a waste of time without direct talks between Abdul Malik al Houthi and Abd Rabbu Mansour Hadi. Progress is slow as each delegation has to report back to its leader, and can move forward only after doing so.

When I raised this dilemma to members of the delegations, they gave a curt answer and refused to elaborate saying, “direct face-to-face peace talks between President Abd Rabbu Mansour Hadi and Abdul Malik al Houthi would be impossible, and things are more complicated than they seem to be.”

For the talks to succeed, there is another element that needs to run parallel to the negotiations. External players (Saudi Arabia, UAE, Iran, US and UK) need to put diplomacy first and encourage Hadi to hold a national reconciliation drive where Yemen's warring parties can establish a new political roadmap.

Saudi Arabia, UAE and US must realise now after four years of fighting that military means alone will not end this conflict. Saudi and the UAE, in particular, must be on the same page in how they envision a post-war Yemen.

The fact that the UAE is supporting a secession movement in the south and executing unlawful killings of Yemeni political leaders undermines peace and stability in Yemen.

So far, these talks are not under threat of collapsing, and it’s crucial that talks end with an agreement on opening Sanaa Airport and establishing a ceasefire to mitigate the worsening humanitarian crisis.


The timing of the peace talks is crucial as international focus on Yemen is unprecedented. The talks come at a pivotal moment—politically and militarily—moment and it must be taken advantage of before the opportunity disappears and Yemen fades out of the public eye, again.


The peace talks are a step in the right direction, but it will be a long and challenging road.