My Turned Down Article by a Major American Newspaper, On Yemen's Civil Society 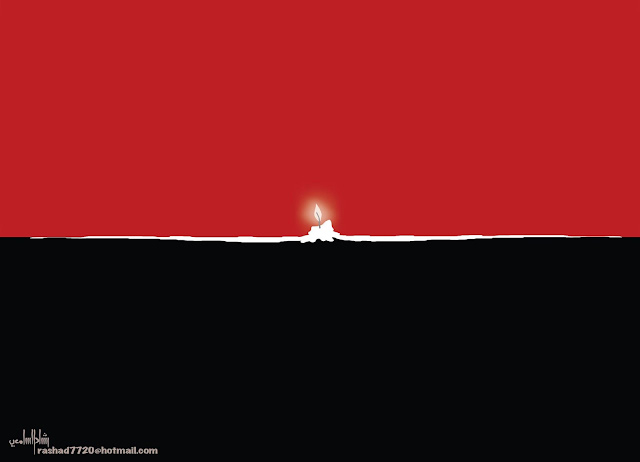 Days after my attendance at the Committee to Protect Journalists' Awards Ceremony in November, I received an email from a major American newspaper -whose name I prefer not to reveal-, asking me to write a column in which I would reflect on receiving my award, my trip and meetings in the US. I gladly accepted their request. So, we discussed the theme of the column in an email or two; then, we agreed to it. So, I would begin writing and I would finish and send the article to them right away. I waited for few days with no reply. So, I sent a reminder email. Then, I was told very politely that my piece wouldn't be published.

I was very disappointed. I wanted to know why, but I was so busy in that week and the following weeks as I was in a transition, locating myself from Sweden to Egypt, and I never asked them why. Now that my days seem less hectic, I thought about the article last night and how it'd be useless to ask the newspaper for the reasons of why my article was turned down. However, I thought, "I could publish the article as it was, on my blog, anyhow, right?"

My award acceptance speech in November at the International Free Press Award ceremony in New York was one of the most difficult writings I have ever done. I didn’t know how it was even possible to summarize the massive atrocities committed in my country, Yemen, in a three-minute-long speech.

Understanding the gravity of these atrocities, the New York-based organization, Committee to Protect Journalists (CPJ) in fact decided to choose Yemen of all the countries in the turbulent Arab region this year to put a spotlight on the forgotten war in the country and the risks Yemeni journalists bear while reporting. Because three-minute-long speech was obviously not enough, CPJ arranged for me a two-week advocacy tour, one week in D.C. and another week in New York.

As I had meetings with policy advisor Christine Lawson at the Department of State, Senator Chris Murphy, other Senate staff, media and human rights organizations, I was thinking of how the Travel Ban (which I managed to defeat after being rejected for the US visa entry twice) could have barred me from actualizing this opportunity. If it wasn’t for the relentless support I had from CPJ, I would not have been able to have one-on-one meetings with these influential people and discuss the U.S. disastrous foreign policies in Yemen.


During our meeting, going beyond the Saudi-Iran-proxy-war-in-Yemen questions, Sen. Murphy’s first question to me was, “how is life like for your family in Yemen, Afrah?” For a moment I forgot that I was in the presence of a politician, but rather a friend. “Every time I call my mother in Sana’a, she’s busy going to a funeral or coming back from a funeral of relatives and friends,” I replied, “in fact, yesterday, she messaged me, ‘all entries to Yemen are closed. We will die, we will die.’”


I woke up, reading a message from my family in Sana'a, "All entries to Yemen are closed. We will die, we will die." #OpenAccessToYemen #افتحوا_منافذ_اليمن
— Afrah Nasser (@Afrahnasser) November 6, 2017

A couple of days before I met Sen. Murphy, the Saudi-led coalition announced closing all entry points to Yemen, in retaliation to a Houthi-fired missile hitting close to Riyadh airport –what Riyadh claims to be an Iranian-made missile and; thus, with the total blockade it aimed to stop arms transfers from Iran to the Houthis. Not long after my meeting with Sen. Murphy, I found out that he had made a strong testimony, condemning the Saudi-led coalition’s total blockade. I hope that my meeting with him and the Yemen suffering he heard about had something to do with his testimony.


Even though I am an independent Yemeni voice, I consider myself part of the collective Yemeni civil society that emerged in the wake of Yemen’s 2011 uprising – not the traditional organizationed civil society, but rather the space in which young people met, interacted, and voiced their grievances and demands. We are perhaps an extension of Yemen’s historic civil society, but we are certainly an untitled Yemeni political component which was tired of an old, undemocratic and corrupt regime whose energy sparked an uprising against the 30-year old rule of Ali Abdullah Saleh in 2011.


As heartbreaking photos of skeletal malnutritioned Yemeni kids and child soldiers fill news media outlets, it’s a reminder that about half of Yemen’s 28 million population are children, teenagers and young adults. That also means that 2011’s protesters who impressed the world with their peaceful movement and who first had taken to the streets, (including myself,) from Sana’a, to Taiz, to Hudaydah and other cities were mostly of young men and women.


While my generation was trying to make the impossible possible, the U.S. administration, along with the United Nations and Gulf Cooperation Council rushed to contain the youth uprising and disrupted what was naturally occurring on the ground replacing it with a power transfer deal. The U.S., in particular, failed to recognize Yemeni youth’s political aspirations and became trapped in what regional powers dictated and wanted to see in Yemen. During the ensuing years, the U.S. continued to approach Yemen through the eyes of Saudi-Iran rivalry geopolitics and dismissed the potential in the emerging alternative Yemeni civil society leadership.


Nonetheless, Yemen’s civil society of individuals and groups continued to be engaged. While I have always been passionate about documenting Yemeni stories, my fellows at Sana’a Center care about policy-analysis, Resonate Yemen focuses on youth’s civic empowerment, the Mwatana organization sets issues of human rights and justice as its priority, Basement organization promotes cultural empowerment and the list goes on.


Even though CPJ chose me as a face representing the struggle facing independent Yemeni journalists, I believe I am one drop in the ocean of the many stories of my Yemeni generation’s struggle and thirst for democracy, social justice and freedom of expression –which in many ways echo American values.


The value of Yemen’s civil society affirms itself as it was one of the key spaces in which people organized and mobilised each other to express Yemen’s 2011 uprising. Had I not joined this platform in 2011 and taken the action which I couldn’t find in Yemen’s political and tribal system, I wouldn’t have had the guts to find my voice. While I appreciate CPJ’s recognition, it’s crucial the U.S. recognizes the political agency among Yemen’s civil society and the constructive role they can play, importantly, in any potential peace process and post-war Yemen.


Current policies; such as, imposing a Travel Ban preventing voices from addressing the American political leadership and offering a blank cheque to the Saudi-led coalition in its war in Yemen would not get us anywhere except towards more destruction and instability in the region, which derails the war on terror. Yemen’s vibrant civil society, still persisting against all the odds. It’s never too late for the U.S. to support the rainbow in the midst of a storm, the Yemeni civil society.