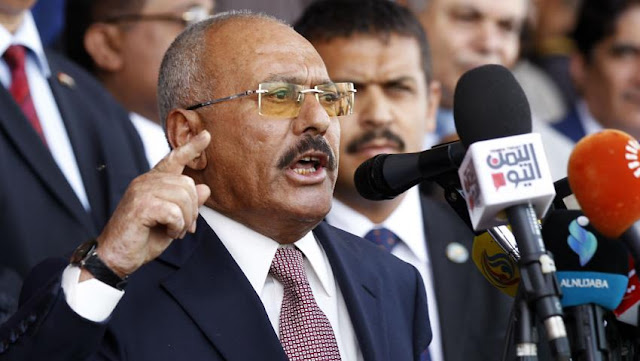 *A political earthquake hit Yemen yesterday, as ousted Yemeni president, Ali Abdullah Saleh was dramatically thrown out of the political scene following his death at the hands of Houthis.
In a deja vu moment, I was reminded of Gaddafi's fate in 2011, and the atmosphere at the start of the 2011 Arab uprisings as a video circulated of Saleh's dead body being dragged onto a truck by armed men.

In a country known for its deep-rooted "revenge culture", Saleh, in some senses, dug his own grave, when many held him responsible for the 2004 death of the Houthis' godfather Hussein Bader al-Din al-Houthi, older brother of current Houthi leader, Abdelmalek al-Houthi.

Voices in the video cry, "we are having revenge for you, Hussein". Murdering Hussein was only one highlight of Saleh's 33-year rule that was tainted with bloodshed.

As Saleh leaves a legacy of political manoeuvring, corruption, and chaos in the country, his death is believed to be the result of a betrayal within his inner circle, from where sensitive information about Saleh's whereabouts was leaked and a trap prepared.

In his televised speech after Saleh's death, Abdelmalek al-Houthi expressed his gratitude, "towards those 'honorary' Yemeni officials who helped us (Houthis) capture the 'traitor' Saleh".

The Houthi field and military leader, Abou Ali Alhakem reportedly spoke hours before Saleh's death, describing how Saleh's calls with UAE and KSA were tapped, which for him provided evidence of his treason.

This is neither a victory to Houthis nor a defeat to Saleh, despite his death. Both leaders are heads of an unleashed dragon that was, and is still willing for all hell to break loose. However, for the man who was well-known for being the most influential politician in the country, there is no question his death poses a greater threat to Yemen's future, and brings serious ramifications.

During the first days of Yemen's 2011 uprising, I was one of a group of revolutionaries taken to meet Saleh at his palace in Sanaa. "What do you and your friends want?" he asked. We all fearlessly replied, "We want to topple the regime. If not, change your cabinet." Our talk lasted less than 10 minutes as Saleh got up yelling, displeased with our demands, and left the room.

We were allowed to leave and went back to the protests, with Change Square determined to continue the uprising. Me, and all my friends there were born under Saleh's rule.

We have only known one president in our lifetime and never imagined the possibility of replacing him. Although Saleh was regarded as immortal after he survived a fatal assassination attempt in 2011, today we are in disbelief as for the first time, we are truly seeing a Yemen without Saleh.

Saleh's death creates an acute power imbalance as Sanaa city has been under heavy fighting on the ground and air-strikes of the Saudi-led coalition. Civilian inhabitants have been trapped and under siege over the past few days in areas of fighting where there is no food, water or medicine.

I call my family in Sanaa every hour to check on their safety, as the death toll of these recent clashes has jumped to at least 125, with 238 wounded. While civilians pay the heaviest price, the Saudi-led coalition is also paying for losing their last card in their almost three-year-long unwinnable war against the Houthis. Losing Saleh and all the intelligence support he could have provided the coalition with mean the Saudis face a great vacuum in their strategic approach to confronting the Houthis.

The Saudis will likely scale up their military operations. Heavy airstrike shelling going on in Sanaa as I write spells out a bleak scenario, with Sanaa looking potentially like another Mosul.


It seems the situation will likely have to get worse before any prospect of improvement. For a country suffering from a huge heritage of impunity and an absolute lack of accountability, yesterday's events bring the initial problem of Yemen's 2011 uprising back to the surface: The unrealised dreams of millions, that envisaged Yemen as a civil state in which equal citizenship and justice were guaranteed for all.

When Sanaa's Change Square became the focal point for Yemeni pro-democracy protests in 2011, one of the first posters to appear at the square was "welcome to the first step towards our civil state".


Today, the enemy of that dream is the extremist vision the Houthis work to impose, restoring the old Yemeni Imamate system as a futuristic political system. Our recent national memory shows how Yemenis could have dealt with Houthi invasion, as the capital witnessed many anti-Houthi protests raising slogans, such as "no for coup" and "no to armed militias".

The fate of Yemen as a united republic lies in the hands of Yemenis. Today's events are the peak of the clash between the essence of Yemen's 2011 uprising, and the Houthi insurgency - between revolutionary ideas and far-right-politics.