In International #DayoftheGirl, Here are my Yemeni Women Heroes 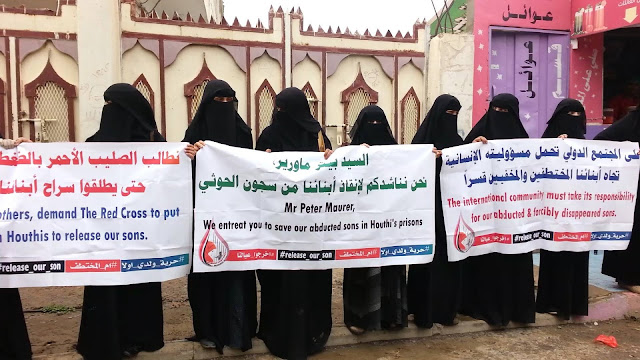 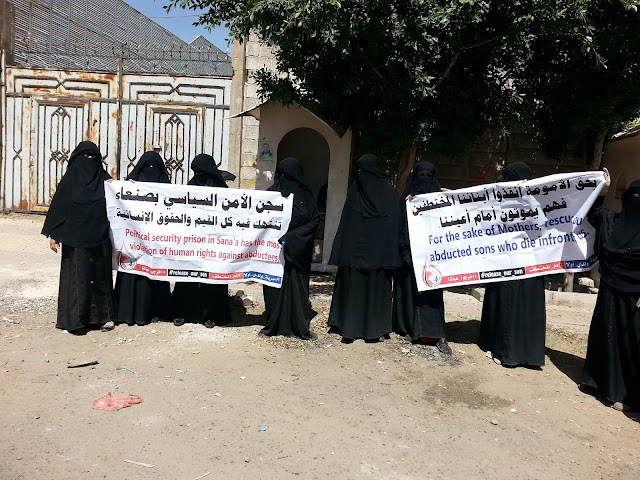 In International #DayoftheGirl, Here are my Yemeni Women Heroes. Mothers of abducted young men in Houthi-led prisons @abducteesmother association, and women and girls survivors of Houthis’ bullets and shelling in Taiz. Mothers of jailed young men have tirelessly been demonstrating in front of prisons’ gates in Sana’a, Ibb, Houdaidah and other cities, over the past two years. A spokesperson from the association told me over the phone that they believe that there are more than 5,000 forcibly disappeared young men (journalists, teachers, activists and from all walks of life) held in Houthi-led jails for two years and more. Many of them are held with no trail or any access for their families to see them. 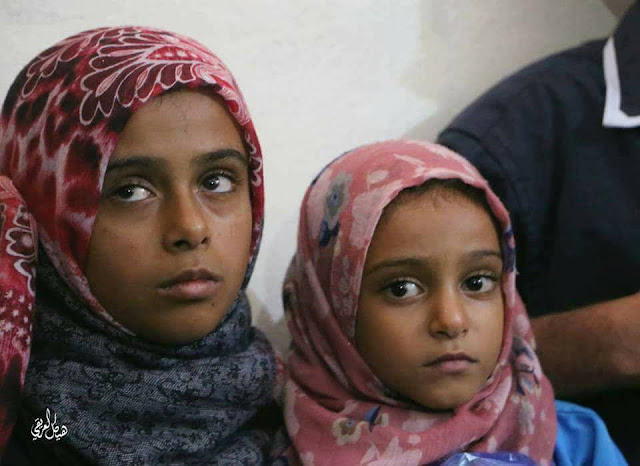 Women in Taiz, like all in Taiz, have been subjected to atrocities under the hands of Houthi forces and other (emerging) extremist groups. The photo here shows two daughters of a woman who was executed in front of them a few days ago by Houthi forces after Houthimen stormed into their house looking after the daughters’ father. The father was known to be an anti-Houthi activist. Taiz has been under siege by Houthi forces since almost the beginning of the war. Deadly attacks and massive killings by Houthi forces have become the new norm in the city. These little daughter's’ story is only a face to the agony everyone in the city is going through.

One of the daughters collapsed in front of the camera as she described what she witnessed.

Here's the father explains how exactly the crime happened.

It’s hard for the international audience to know about the atrocities committed by Houthis forces as many local Yemeni journalists are whether imprisoned, living in hid in villages, or displaced in neighbouring countries or definitely they are self-censoring themselves fearing of Houthis’ crackdown.

Even if a Yemeni journalist is trying to report from outside the country, there seem to be a little appetite from editors to have such stories. The trend shows that there is more interest to focus on the Saudi-led coalition committed atrocities, as such stories make more relevance to the international audience.


This is absolutely not to dismiss Saudi-led coalition atrocities or to equate warring sides’ crimes but this is an invitation to broaden your context. Between Yemenis, they know well that the Saleh-Houthis alliance is what started all this mess after they blocked all political progress and outcomes of Yemen’s National Dialogue Conference in mid-2014. And the rest is history.

Millions of Yemeni women, along with men and children, are victims of all warring parties' atrocities across the country. In fact, the Saudi-led coalition shares great responsibility of leaving Taiz under Houthis' fire so it can have victims bloody photos raised at the international stage to prove how Houthis are savage. The Saudis could have achieved in Taiz what they achieved in Aden. But you do the calculation.

I will take this day to pay tribute to the struggle of mothers, daughters and sisters of Yemen war victims. No rosy story to tell about Yemeni girls inside or outside. The reality is so grim.