Yemeni woman activist refuses to give up following death threats

*Human rights lawyer Huda al-Sarari says she fears for her life after denouncing torture in secret prisons in Aden.


Huda al-Sarari was called a liar, a mercenary and even a “whore” on social media, during a vicious online campaign against the Yemeni human rights lawyer. Her ordeal began in June after she spoke out against torture in secret prisons allegedly run by the United Arab Emirates in Aden.

Sarari, who documented the abuses during an investigation and spoke about it to the media, said that her phone was stolen from her home, her car was attacked and she received death threats following the campaign. “I was afraid to leave my house or speak to media for more than a month,” Sarari told Middle East Eye. “But now, I want the word out, at least, about the dreadful experience [human rights activists have to] bear."

The defamation campaign against Sarari started in June on social media, after Human Rights Watch and the Associated Press published two separate investigations accusing the UAE of running secret prisons in Yemen, where many people were reportedly tortured and abused. She is one of the rights lawyers who documented the testimonies of torture victims held in the secret prisons and delivered them to HRW. She also gave interviews regarding her findings on several prominent media outlets after the reports came out.

HRW documented the cases of 49 people, including four children, who were arbitrarily detained or forcibly disappeared in the Aden and Hadramawt governates over the last year. At least 38 appear to have been arrested or detained by UAE-backed security forces. Multiple sources, including Yemeni government officials, have reported the existence of a number of informal detention centers and prisons in Aden and Hadramawt, including at least two run by the UAE and others run by UAE-backed Yemeni security forces.

The UAE Foreign Ministry denied running any secret prisons in Yemen and called the accusations "an attempt to sully the reputation of the alliance that had intervened to save the Yemeni people". The UAE is a key member of the Saudi-led and US-backed military campaign to support Yemen’s toppled government against Shia Houthi rebels, which was launched in March 2015.

According to a draft United Nations report seen by Reuters on Thursday, the Saudi-led military coalition was responsible for an "unacceptably high" 51 percent of child deaths and injuries in Yemen last year. In January, the UN said that since the Saudi-led coalition intervened in 2015, the death toll has risen to at least 10,000 civilians.

One of the posts attacking Sarari stated that “the so-called Huda al-Sarari works in disguise with human rights groups, while she actually reports to political and security foreign parties, jeopardising [the] South’s interests and its goal for liberation." The Emergency Committee for Civil Society Organisations in Aden condemned the acts of defamation against Sarari and her family in a statement which spread on social media following the smear campaign. “The objective of this [campaign] is to reduce any efforts to defend human rights,” the statement said.

One day after the online attacks started on 23 June, Sarari and her family said they began to receive death threats. Sarari said that her phone was stolen from inside her home in Aden. Nothing else was taken from her house. The same day, her car windows were smashed. She added that her internet connection at home was deliberately cut off by an unknown person. Shortly after that, an acquaintance paid her a visit at her office to deliver her a "message" telling her that she should "be careful of your coming steps, otherwise you will risk your life", according to Sarari. 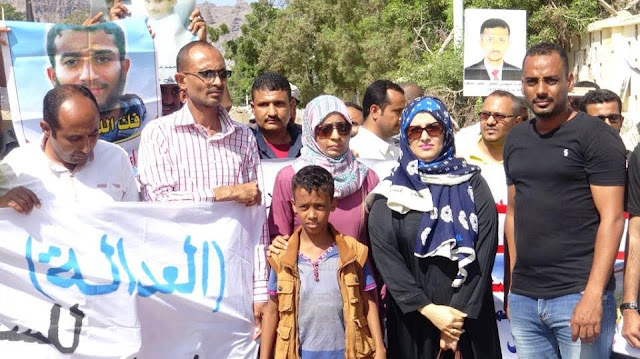 
Sarari graduated in Sharia and Law from Aden University in 2011. She also holds a master's degree in Women's Studies and Development from the Women's Centre at Aden University.

She has been working in human rights activism for almost 10 years, gaining experience at numerous local organisations such as the Yemeni Women's Union, the Adala Foundation for Rights and Freedoms and the National Committee to Investigate Allegations of Human Rights Violations. She has also volunteered to work with Amnesty International and HRW.

With this experience, Sarari is accustomed to criticism. But this latest attack was something she has never experienced before. Sarari was disturbed by the posts, which she said were very personal and attacked her husband and children while identifying where they lived and even the car she drove. Her family was terrified when the social media campaign gained momentum. Huda’s mother, who preferred not to disclose her name, told MEE that, “if Huda is not fearful for her life, she must be fearful for the safety of her children," she said. "And because Huda is a woman, they go after her honour and this is unacceptable in our society.”


Sarari agrees that the worst part of the campaign launched against her is the libel and slander, which could bring shame to her whole family in the conservative society of Yemen. “As you may know, Yemen is a conservative society, in which women’s honour is perceived as sacred,” Sarari said. “Calling me degrading words like a whore has a stronger negative impact on me than it does if it were directed against a male activist.”

But others have also come to her defence. One Facebook post stated: "She said a word of truth against injustice, while you cheer for injustice, you who defame her honour should get whipped as a punishment according to our Sharia - that’s if there is any sharia in our land."


According to the HRW report, the court system in Aden is largely not functioning because of the war. Although the prosecutor’s office continues to issue release orders for people, these orders are ignored by security forces controlling the area. As a result, Sarari has found it futile to report threats against her to the prosecution and seek protection. "There is no chance to report threats today to the attorney general like we used to before, as it has been out of commission, impacted by the general instability," she said.

Aden is under the control of the Security Belt, a southern force taking part in the war. According to the HRW report issued in June, the "Security Belt" forces, are backed by the UAE. They have been accused of many abuses including excessive force during arrests and raids, detaining children, causing forcible disappearances and detaining family members of wanted suspects to pressure them to “voluntarily” turn themselves in, according to HRW. Sarari avoided approaching the "Security Belt" forces, given their links to the UAE. Instead, she contacted influential Yemeni political leaders.

"They couldn’t promise me much protection,” Sarari laughs and continues: “One [political leader] literally told me, 'how about you quit your activism and avoid facing risks?'”  For now, Sarari is taking basic safety measures such as limiting her movement, especially at night.

Kristine Beckerle, Yemen and UAE researcher at HRW told MEE: “Female activists like Huda al-Sarari are fighting every day for more rights protections, yet instead of addressing the important issues these [activists] are rising, many instead have faced smear campaigns, death threats, or a myriad of other challenges." "This is not only incredibly unfair to, and often very dangerous for, the women and men who have dedicated their lives to pushing for a more justice-oriented Yemen, but damaging to any future hope for a stable, rights-respecting state," she added.


According to local reports, there have been other instances where female activists have been subjected to similar online campaigns, like Radhya al-Mutawakel, who heads Mwatana, a human rights group based in Sanaa. In March, she was one of the speakers who addressed human rights violations in Yemen at the Dirksen Senate Office Building in Washington. She said that all parties in Yemen were committing human rights violations including the Houthi rebel group and the Saudi-led coalition.

The Yemeni embassy in Washington sent a letter trying to discourage congressional aides from attending the briefing in Washington. The embassy accused local speakers, including al-Mutawakel, of having a political “agenda” tied to Houthi rebels fighting against the government of President Abdu Rabbuh Mansour Hadi. The claim was denied by the event's organisers. Sarari said it was up to the main parties in the war, including the Yemeni government and the UAE, to restrain the armed groups and protect rights workers, especially women.

“I wish I had better advice for women activists in terms of how to protect themselves or could give clear answers on what human rights organisations could do to protect them," said Beckerle , "but, it really comes down to the authorities - to the Yemeni government and other actors like the UAE exercising influence over armed groups and fighting forces in Aden to be doing far more to ensure that there is space for men and women to speak out, advocate and do the work crucial to Yemen’s future."


'They depend on me'


Even though Sarari admits to being scared, she is determined to continue her work and has never considered quitting. Although it has been a difficult time for them, her family and husband offer their unconditional support and simply ask that she is careful. Part of Sarari’s many commitments are her assignments within the legal team of the Yemeni Women's Union. Its work includes offering legal protection for women in personal status cases and protecting the rights of female prisoners.

“Working with these women is like a driving force for me,” Sarari concluded. “Many abused women’s cases depend on me, so I have to ignore the threats and get up again and continue working.”