My first contribution piece to FreeArabs.com

Past generations of Yemenis have watched as their country descended the ladder of gender equality. Luckily, Yemen’s young activists are stepping up and speaking out.


From left to right, Diala Haidar, FarahBarqawi and Yalda Jounes, the co-founders of TUWAW's Facebook page and international movement.

“The Uprising of Women in the Arab World” (TUWAW) Facebook page has accrued over 100,000 followers since its inception in October of 2011. The page invites users to follow trending activism issues and engage in international dialogue concerning topics relevant to Arab women.

While I know the page is regularly updated by posts from around the world, it shocked me to learn that the highest number of contributions came from Yemen – a country long accustomed to the murky bottom of the discrimination-ranking Gender Index. Considering how limited Internet access is in Yemen, the feat deserves extra plaudits. Apparently Yemen is pushing back against the gender inequalities that make it difficult for women’s success. Co-founders of TUWAW’s Facebook page and international movement, Yalda Jounes, Diala Haidar and Farah Barqawi, confirmed the incredible Yemeni response during a Women Bloggers Conference in Morocco last week. They noted that most of the posts come from a surprisingly wise pool of Yemeni youth. The posts by these youngsters adroitly reflect on the serious social grievances Yemeni women endure, including child marriage and sexual harassment.

This is what founders like Farah Barqawi hoped the page would encourage. “The idea of the page and blog,” she said, “came with the Arab Uprisings… with the awareness that women and men in the Arab World were missing rights and freedoms.” The page would, she and her co-conspirators believed, provide the perfect forum for women (and men) to lobby for bigger steps toward gender equality. While the uprisings were a good start, “revolutions,” Barqawi stated, “are either complete with women or [aren’t] at all.”

It’s this idea that’s caught on with TUWAW’s followers. Those posting from Yemen seem to have fully embraced the notion that a total liberation for a nation won't happen if half of its population is oppressed. The dissemination of this concept is particularly important in a country like Yemen, which is often characterized by its ultra-conservative mores. Luckily, we can see some changes taking shape there – changes I never imagined I’d see. 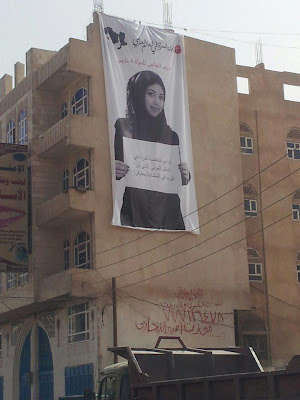 One instance occurred in March of 2013 when a women's rights activist, Renad Mohammed, managed to hang a massive, feminist, political poster in the heart of Sana’a city for a week. The poster showed women’s rights activist Ala'a al-Eryani holding the following statement: “I'm with the Uprising of Women in the Arab World because I won't stop demanding my rights.” It was an unprecedented step that brought women’s rights issues directly to the people.

Additionally, Mohammed organized and held a seminar on women's rights issues in Yemen, to mark International Women's Day. The idea, she admitted, was inspired by the TUWAW Facebook page. The seminar was a complete success and even attracted the attention of BBC Arabic, which reported on the event. Hopefully Yemen's law-makers were listening as well.

While TUWAW is getting the message out to youth activists around the Arab World, its themes seem to resonate particularly strongly with intrepid young activists in Yemen. What the Yemeni bloggers, Facebook users, and organizers are showing is that women’s rights and Yemeni activism are both alive and strong.