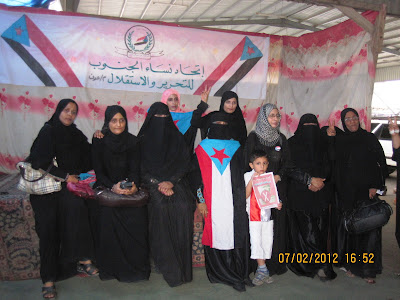 Aden, Yemen - Before Yemen's unification and the bloody civil war that followed, women in the southern port city of Aden say they were educated professionals with rights not experienced by those in the conservative north. Yemen's unification in 1990 curbed those rights. Southern women were laid off from their jobs en masse, and gender discrimination took firm hold when former President Ali Abdullah Saleh's victorious regime rolled into Aden four years later.

This year, Yemeni women hold a 30 percent quota of the 565 seats in the ongoing National Dialogue talks in Sanaa. Brokered by the Gulf Cooperation Council (GCC) states during the 2011 revolution, the talks are intended to address outstanding grievances, including women's rights.

Female activists hope the conference will pave the way for a new, moderate constitution, and an equitable interpretation of Yemen's penal code and the personal status laws that govern women's lives.

But Aden's women are split. While some are fixed on achieving this goal through the National Dialogue, others dismiss it as irrelevant and prioritise their struggle for a separate southern state.

After British colonialists left in 1967, a Soviet Union-backed socialist government ruled South Yemen. Aden residents talk nostalgically of mixed-sex schools and culture and proudly reel off professions that had high numbers of women - such as judges, geologists, doctors and business owners - before unification took hold.

'Even the children are covered'

"Things have gone backwards for women," explained Sultan Al-Shaibi, Aden's deputy governor. "We had an open-minded mentality. We had grown up with the law under the British, and continued under civil rule," he said. "My mother would wear skirts. Now even the children are covered."
Roza Ghani, a 40-year-old pilot with Yemenia airlines, is commonly spoken of with awe. Aden-born Ghani co-pilots long-haul commercial flights with two men in the cockpit, because she is not allowed to work alone with one.

She survived an armed hijacking in 2001, and navigated violent airspace during the start of the 2003 Iraq war. She says she flew the last Yemenia aircraft to land in the besieged Damascus airport earlier this year. Ghani credits her father with encouraging her to fly. She worked as an air hostess for a spell, and said people in Sanaa didn't understand the difference between that and her aspirations to be a pilot. "All the Yemeni men thought maybe I was weak because I am a woman," she explained. But she said she won them over with her professionalism. "I act appropriately, and I keep socially to myself."

Personal status laws governing marriage, divorce and inheritance favour males. The age limit for marriage has been erased, with grave ramifications. Early and forced marriages are linked to a lack of education and careers, poor health and domestic violence. And under the penal code, men who commit "honour killings", such as murdering women suspected of adultery, are sentenced to a one-year maximum prison sentence, or a fine.

For women in Aden, the brutal siege by northern troops in 1994 was a catalyst for the negative change. Activist and writer Huda Al-Attas blames Sheikh Abdul Zindani, a leader of Yemen's Salafist movement, for instigating war crimes then. "He announced a fatwa that basically said killing southerners is halal[permissible under Islamic law] because the communists were behind them."

Ebthal Badhrais, an Islamic studies teacher, witnessed the deadly decree up close. While her female friends were searching for water during a lull in the battle, they were shot dead by troops who called them non-believers. Since then, Badhrais said her school became single-sex and a conservative curriculum was imposed. Her colleagues criticise her for eschewing a black niqab, which fully covers the face, in favour of colorful hijabs and make-up. "They act like I missed my way in Islam."

But the parents of her students like her teaching, Badhrais said, which makes the job worth it. "Islam is about spirit, soul, behaviour, forgiveness, and respecting others."


Secession 'the only solution'

Muna Busharaheel, an art professor, was also shocked by the new regime. Police accosted her and her husband for holding hands on the beach and demanded to see their marriage papers. After a heated argument, the couple was forced to pay a bribe to avoid arrest.

These three women believe a separate southern state is the only solution to their woes, and that only then will women's rights be achieved. "We think the National Dialogue won't change the country's mentality - it will stay the same towards women," said Badhris. "We don't believe in change because we see the same faces. Yes, they will write a new, good constitution - but they will not implement it. It will just be ink on paper. The people who control the country won't allow real change to happen." Hundreds of miles across Yemen in the mountainous north, two National Dialogue members from Aden discussed the challenges.


Alia Faisal Al-Shaibi of the Yemeni Socialist Party bloc said she had received threats from southern separatists for her participation. "This is their opinion because of their suffering, and because there has been no progress from the government," she acknowledged. "Maybe the killers are in the hall to talk with me. But with no dialogue there is no solution," she explained. "After this, maybe we can determine the shape of the country."

Imam Shaif Al-Khateeb is a strong-willed judge, who presided over criminal and civil cases in Aden before she followed her husband to the capital. There she was barred as a woman from her profession. "The southerners who stayed in the south suffered," she said. "So those in the south want 100 percent separation. Those who accept federalism are in Sanaa." Al-Khateeb believes calls for separation are dangerous. "There is no government, no military, no budget - no-one to lead this. The leaders of the south don't have a specific vision."

Instead, her goal is clear. As part of the talks' independent woman bloc, Al-Khateeb is proud of the 30 percent quota for women. Now they have to work to implement the quota in the government, change the constitution, and amend the personal status laws and penal code.

"I want to cancel all those laws which discriminate against women," she said.